(CNN) -- Personal computer maker Lenovo, expecting to report a loss for the third fiscal quarter ending December 31, announced it would cut 2,500 jobs as part of a restructuring expected to save $300 million. 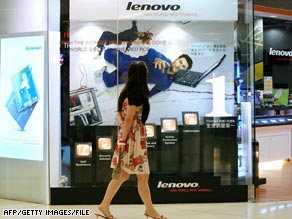 A woman walks past a Lenovo advertisement at a computer shop in Hong Kong.

The cuts comprise about 11 percent of the Chinese computer manufacturer's global workforce.

"Although the integration of the IBM PC business for the past three years was a success, our last quarter's performance did not meet our expectations," Yang Yuanqing, Lenovo's chairman of the board, said in a statement. "We are taking these actions now to ensure that in an uncertain economy, our business operates as efficiently and effectively as possible, and continues to grow in the future."

The job cuts, to occur during the first quarter, will include management and executive positions and also affect finance, human resources and marketing divisions, the company said.

In addition, the "resource redeployment plan" included executive compensation reductions of 30 percent to 50 percent, including bonuses, and the consolidation of its China and Asia-Pacific organizations into a single business unit to be called Asia Pacific and Russia .

As part of its restructuring, the company said it was relocating call center operations from Toronto, Canada, to Morrisville, North Carolina, the company's North America headquarters in order to "better leverage its investment in real estate and facilities."

All About Lenovo Group Ltd.