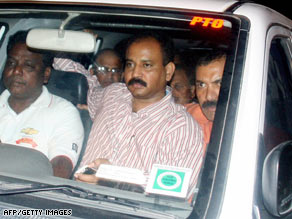 Satyam founder B. Ramalinga Raju is shown Saturday being sent to prison in Hyderabad.

Satyam, India's fourth-largest software-services provider, serves almost 700 companies, including 185 Fortune 500 companies, and generates more than half its revenues from the United States. It employs some 53,000 people and operates in 65 countries.

B. Ramalinga Raju resigned Wednesday and confessed to padding company balance sheets. The practice began several years ago to close "a marginal gap" between actual operating profit and one reflected in the company's accounting books, he said, but continued for several years.

"It was like riding a tiger, not knowing how to get off without being eaten," B. Ramalinga Raju said in a letter to the company's board of directors.

He said no board member was aware of what he was doing and he did not profit from the inflated accounts.

The deception came to light after he tried to plug the hole by getting Satyam to buy his son's construction companies. The acquisition was "the last attempt to fill the fictitious assets with real ones," he wrote in his letter.

The deal would have cost Satyam $1.6 billion -- but the company's board vetoed it. Stocks fell following the botched deal. Soon afterward, B. Ramalinga Raju came clean, saying he was doing so "with deep regret, and tremendous burden that I am carrying on my conscience."

After his confession, stocks of the Hyderabad-based company fell more than 70 percent, causing India's major stock index, the BSE SENSEX, to fall 7.3 percent Wednesday. The BSE SENSEX on Thursday deleted Satyam Computer Services from its indices.

CNN's Bharati Naik and Harmeet Singh contributed to this report.

All About India • Business