Bank of America gets another $20B

WASHINGTON (CNN) -- Bank of America will get another $20 billion from the U.S. government's bailout fund, with federal guarantees for another $118 billion in mortgage-backed securities on its balance sheets, the Treasury Department announced early Friday. 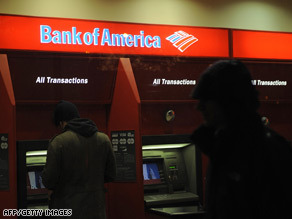 The new arrangement provides additional capital for Bank of America in exchange for preferred stock with an 8 percent dividend, the Treasury, the Federal Reserve and the Federal Deposit Insurance Corporation announced in a joint statement.

Bank of America has agreed to restrictions on executive pay and will be expected to adjust mortgages for troubled borrowers.

The FDIC will also extend its temporary loan guarantee program, which insures some debt beyond current limits, in exchange for expanded lending to consumers, senior government officials told reporters in a midnight briefing on the plan.

The deal also provides a backstop in case of "unusually large losses" on assets backed by real-estate loans. Most are being absorbed by Bank of America in its buyout of brokerage house Merrill Lynch, a $50 billion acquisition in the works since September. The assets will remain on the company's books, the feds said.

The $20 billion in funds from the Troubled Assets Relief Program (TARP) -- the $700 billion bailout fund created by Congress in October -- should be transferred to Bank of America later Friday, according to one of the officials. They did not say whether other troubled banks will need similar assistance.

"Each time we do one of these, we hope it's the last one we will ever have to do," one said.

Bank of America's shares fell 18.4 percent Thursday and have tumbled 36 percent so far this week. The company declined to comment.

Bank of America, which has already received $15 billion in government capital, including $10 billion set aside for Merrill Lynch, reportedly first approached the Treasury Department for help last month as losses mounted at the failing Wall Street firm. Government officials agreed to step in to avoid the merger's collapse, which would further roil the financial system.

The purchase, which was announced hours before Lehman Brothers filed for bankruptcy in mid-September, closed January 1.

The deal would mark the second time the federal government has had to step in again to prop up a faltering financial institution. In November, officials injected another $20 billion into Citigroup, which had already received $25 billion, and agreed to backstop more than $300 billion in troubled assets.

Under the terms of the Citigroup rescue package, the bank would be on the hook for the first $29 billion in losses on the covered assets, which includes mostly loans backed by residential and commercial mortgages. It would cover 10% of losses above that amount, with the government shouldering the rest.

The Treasury Department has less than $60 billion left to inject into banks under its capital purchase program. President-elect Barack Obama on Thursday secured access to the $350 billion remaining in the federal bailout package, after a measure that would have blocked the funds' release failed in the Senate.

Some say banks are likely to get additional capital infusions this year. Federal Reserve Chairman Ben Bernanke said Tuesday that the government must pump more money into troubled financial institutions and that further guarantees of their debt could be necessary.

Bank of America, which had been viewed as one of the strongest banks in the country, may be buckling as the nation's economy worsens. Also, several key Merrill Lynch executives recently departed the merged firm.

The Charlotte, North Carolina-based bank has also taken over two ailing companies that thrust it deeper into the most troubled sectors of the financial system. Not only did it take a big gamble on its $24 billion acquisition of the faltering brokerage titan, but it also bought battered mortgage lender Countrywide Financial early last year.

Analysts are rapidly reducing their estimates for the bank, with some even expecting a loss. Citigroup is expected to report a whopping loss Friday, while JPMorgan Chase (JPM, Fortune 500) said its profits plummet 76% Thursday.

Bank of America is expected to report higher charge-offs for uncollectible debts, increased loan reserves and greater trading losses, wrote Richard X. Bove, analyst with Ladenburg Thalmann. He reduced his estimates to $0.68 per share from $1.14 per share on Wednesday.

Merrill Lynch is expected to shave 15 cents off Bank of America's 2009 earnings, wrote Jeff Harte, analyst with Sandler O'Neill & Partners, who predicts the bank will report a 2-cent loss for the quarter.

Bank of America already announced it plans to shed up to 35,000 jobs over the next three years as it integrates the Wall Street firm. Chief Executive Ken Lewis gave up his 2008 bonus last week.

All About Bank of America Corporation