(CNN) -- BHP Billiton, the world's largest mining company, said Wednesday it will cut about 6,000 jobs due to the deteriorating outlook in the global nickel market. 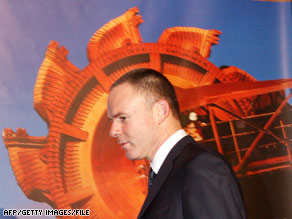 BHP Billiton CEO Marius Kloppers said the world's biggest miner was in a better position to cope with a slowdown.

Seventy percent of the reductions will come from the ranks of the company's contractors, said Samantha Evans, a BHP Billiton spokeswoman. Additional cuts in coal production could come in the second half of the year.

The cuts amount to about 6 percent of the company's workforce, with the majority of them in Australia. About 3,300 jobs will be cut there, with 2,000 more coming from Chile and 550 from the United States, according to Evans.

"We have ... been quick to take appropriate action to respond to market conditions, such as the previously announced production adjustments and project withdrawals, and we will continue to do so if required."

All About BHP Billiton Ltd.