(CNN) -- Tens of thousands of job losses were announced on Monday as American economists said they expected an already deep recession to worsen in 2009. 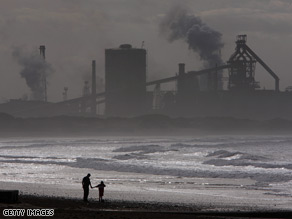 The grim news came from all around the world. In the United States, heavy vehicles maker Caterpillar said it would cut 5,000 more jobs in a bid to "deal with a very challenging global business environment."

The heavy construction machinery manufacturer had already said it was cutting 15,000 workers, most of which were announced in the fourth quarter of 2008.

In all, the 20,000 people who will lose their jobs amount to about 18 percent of the company's total workforce. Caterpillar currently employs about 113,000 workers.

"While it's painful for our employees and suppliers, it's absolutely necessary given economic circumstances." The news came as the company reported record sales and revenue of $51.3 billion for 2008.

In Europe more than 10,000 job cuts were announced. Dutch-based finance and insurance group ING said it was cutting up to 7,000 staff in an effort to help save $1.4 billion.

And Netherlands-based electronics giant Philips said 6,000 jobs would be lost worldwide in 2009 following quarterly losses of €1.5 billion ($1.9 billion), its first quarterly loss since 2003.

European stock markets finished the day higher with London's FTSE 100 up 3.9 percent, Paris' CAC 40 up 3.7 percent and the DAX 30 in Frankfurt 3.5 percent. Earlier, Asian markets closed down by up to about 1 percent.

In New York, the Dow, Nasdaq and S&P were helped by better-than-expected readings on existing home sales and pharmaceutical giant Pfizer announcing it has signed a deal to acquire the smaller drugmaker Wyeth for $68 billion.

According to early tallies, all three U.S. markets closed up but by less than 1 percent.

Meanwhile, a survey by the U.S. National Association for Business Economics said companies will lay off more workers and hoard more cash during the next 12 months.

Most of the 105 economists polled said they thought the output of the U.S. would continue to sink -- from already historic lows -- this year.

"NABE's January 2009 Industry Survey depicts the worst business conditions since the survey began in 1982, confirming that the U.S. recession deepened in the fourth quarter of 2008," Sara Johnson, a NABE economist, told CNNMoney.com.

Each day is now bringing fresh bouts of bad news on jobs. Last week Microsoft said it would cut 5,000 jobs over the next 18 months, showing that even the biggest and richest companies are being hit hard by the recession.