TOKYO, Japan (CNN) -- Sony blamed the global economic slowdown, increased competition and an appreciating yen for a 95 percent drop in third-quarter profits, as the company announced its results Thursday. 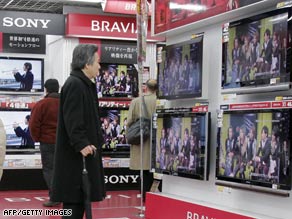 Across the company, sales were down 25 percent, but electronics and games sales were especially hard hit.

Sales of games, including the company's popular PlayStation series, fell 32 percent over the year. Sales of electronics decreased by nearly 30 percent.

The appreciation of the yen also cut into profits.

Last week, Sony warned that it will close out the fiscal year, which ends March 31, with an operating loss of 260 billion yen ($2.9 billion), its first in 14 years.

Watch what lies ahead for Sony »

All About Sony Corporation