LONDON, England (CNN) -- Hundreds of energy workers across the UK have taken strike action Friday in protest over the use of foreign workers on a multimillion-dollar oil refinery project on the northeast coast of England. 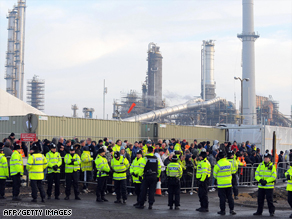 Protesters gather outside the Total Lindsey oil refinery in north-east England on January 30.

The dispute surrounds the decision by oil giant Total to award Italian company IREM a contract to build a new hydro desulphurization facility at its Lindsey Oil Refinery in North Lincolnshire.

The British Press Association reported that several hundred demonstrators had gathered for a third day outside the plant, following a walk-out by contractors on Wednesday, but the unofficial action has now spread to other parts of the UK, including Scotland and Wales.

In Scotland, hundreds of workers at the giant Grangemouth oil refinery walked out following an early morning meeting Friday. According to PA, the mechanical contractors, who work for BP and INEOS, said they were supporting their colleagues in Lincolnshire.

Elsewhere, PA reported that police were called to the Aberthaw power station near Barry in South Wales after workers staged a protest, while around 400 workers staged a demonstration at the Wilton oil refinery in Teesside, north-east England.

In a statement released Friday, Total said: "We recognize the concerns of contractors but we want to stress that there will be no direct redundancies as a result of this contract being awarded to IREM and that all IREM staff will be paid the same as the existing contractors working on the project.

"It is important to note that we have been a major local employer for 40 years with 550 permanent staff employed at the refinery. There are also between 200 and 1000 contractors working at the refinery, the vast majority of which work for UK companies employing local people.

"On this one specific occasion, IREM was selected, through a fair and competitive tender process, as the most appropriate company to complete this work. We will continue to put contracts out to tender in the future and we are confident we will award further contracts to UK companies."

Five British companies and two European contractors bid for the work before it was awarded to the Italian firm on the basis that it was supplying its own permanent workforce, PA said.

The news agency added that 100 Italian and Portuguese workers are currently on site, with a further 300 expected to arrive next month. The workers are being accommodated in large, gray housing barges moored at nearby Grimsby.

Meanwhile, The Guardian newspaper reported Friday that British Prime Minister Gordon Brown was quizzed about the strikes during a news conference at the World Economic Forum in Davos, Switzerland.

All About TOTAL SA • Oil Production and Refining