(CNN) -- Germany's much-loved model train manufacturer, Maerklin, has filed for bankruptcy, leaving fans around the world wondering whether it's the last stop for the company's toy business. 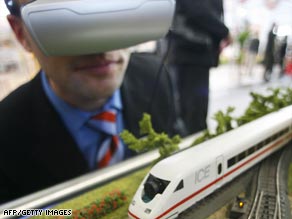 This Maerklin train has a video in the front so users get a driver's view.

Maerklin has been building toy trains for nearly 150 years and its railroads made their way into countries as far away as Australia and New Zealand.

The company said it applied for insolvency proceedings Wednesday after talks to secure credit from banks broke down. Despite intensive negotiations, the commercial banks did not extend their lines of credit, Maerklin said.

"It is sad," shopper Frank Steen, 39, said at London's famous Hamleys toy store. "With fewer older brands around, all we're left with is Japanese plastic."

Although Maerklin generated a turnover of around $165 million in 2008, it struggled to obtain a credit extension beyond January 31, it said.

Despite financial difficulties, the company still planned to set up its stall Thursday at the Nuremberg Toy Fair.

Railway devotees will have plenty to look forward to after Maerklin boss Dietmar Mundil promised to bring 400 new products to the show.