(CNN) -- One of Japan's largest banks on Friday announced a loss for the nine-month period ending December 31, hit by weak markets and a recession at home. 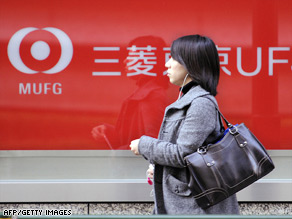 Mitsubishi UFJ Financial Group reported a net loss of ¥42.07 billion ($467.44 million) in the April-December period, its first loss since the group was launched in 2005.

The bank blamed the bleak outcome on a "decrease of net fees and commissions" in businesses such as investment trust, insurance securities and real estate.

Meanwhile, Reuters.com quoted Japanese financial daily, Nikkei, as saying the "mega bank" -- which has already taken a ¥100 billion valuation loss due to the stock market downturn -- may face further write-downs since stock prices have continued to fall.