By Priyanka Deladia
For CNN

LONDON, England (CNN) -- You can manage your bank balance and social life on the Internet and very soon you will be able to manage your electricity consumption online. 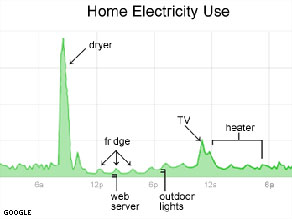 This graphic shows how much energy is being consumed by household devices in real time.

The development could be welcome for consumers as the recession and high energy prices put pressure on household budgets.

And environmental concerns have sparked a growing demand for devices that read energy usage, or misusage. About 40 million trackers are in use worldwide and Internet giant Google says it believes another 100 million will be sold in the next few years.

Google says it is testing one such software tool, the PowerMeter, that shows consumers their home energy usage almost in real time on their computers.

You simply set the rate of your electricity cost and plug your appliance into the device, and a monitor calculates its energy cost.

Another device is the Electric monitor, which is fitted to the electricity meter and calculates the cost of your power as you consume it.

Studies have shown that access to home energy information can save the consumer 5 to 15 percent on their monthly electricity bills. If half of America's households cut their energy consumption by 10 percent it would be the equivalent of taking eight million cars off the road, says Google.

Google PowerMeter will receive information from smart meters and energy management devices and this information will be provided to anyone who signs up access to their home electricity consumption on the iGoogle homepage.

PowerMeter has yet to be made available to consumers, but it could spell an end to shocking energy bills.