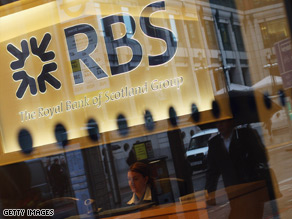 "Last year was undeniably tough and a worsening economic environment means that 2009 will present significant challenges in all of our markets," said Philip Hampton, RBS chairman. "The path to recovery will be neither smooth nor straight."

The results were not quite as bad as had been expected, said CNN business anchor Charles Hodson, and they caused RBS shares to rise 25.5 percent by close of play Thursday.

"This is a watershed," Hodson said. "RBS hopes this is a positive turning point ... that now this is where the recovery begins, with the old regime being laid to rest."

Hodson added: "RBS will hope this is as bad as it gets. But there's a body of thought that says it's badly positioned."

The 2008 financial report from RBS includes a three- to five-year restructuring plan that will focus the group's business in the United Kingdom, with more limited global operations. The plan includes changes in management, isolation of toxic assets, and selling or closing "non-core" businesses.

Last October, RBS was one of three major banks the British Treasury pumped $63 billion into to keep liquid. The other two financial institutions were HBOS and Lloyds TSB.

"We have moved purposefully to take major decisions that are necessary to restructure the group," said Stephen Hester, RBS group chief executive. "We are charting a path to standalone strength and with it the goal of justifying the support of the UK government and all our shareholders."

In January, the government announced the Asset Protection Scheme -- an effort to help British banks caught up in the global financial crisis. The Treasury revealed details of the plan Thursday.

The plan has a number of facets benefiting the bank and the government.

Under the plan, the British government will insure £325 billion in RBS assets. RBS must pay a "participation fee" of £6.5 billion to the Treasury and bear 19.5 billion of any loss -- a sort of deductible.

In addition, RBS will promise to lend £25 billion this year -- £9 billion for mortgage lending and £16 billion to businesses. That commitment is key for the government, which has been urging banks to increase lending.

The government will also inject an extra £13 billion in capital -- a move that will raise the government's stake in RBS to 80 percent.

RBS must now start restructuring and cutting costs, and layoffs are likely.

"We're going to see a much slimmer bank, a much smaller balance sheet, several billion dollars' worth of costs taken out, and hopefully that will guarantee them a future," Hodson said.

The Royal Bank of Scotland is one of Britain's oldest banks. It was founded in Edinburgh, Scotland, in 1727 and branched out to England in 1874.

After winning a takeover battle for British bank NatWest in 2000, RBS set its sights on Dutch bank ABN-AMRO. Two years ago, RBS bought ABN-AMRO as part of a consortium with Santander and Fortis, paying $15 billion for its share out of a total of $75 billion.

ABN-AMRO was the source of big write-downs for RBS, leading to the government bailout in October.

Earlier this month, former RBS Chief Executive Fred Goodwin told members of the British Parliament he was sorry for the bank's part in the global financial crisis.

"There is a profound, unqualified apology for all of the stress that has been caused," Goodwin said. But he said the troubles at the bank were not all due to him.

Goodwin, 50, faced scrutiny Thursday over his annual pension of 650,000 pounds ($933,000) following RBS's announcement. British Chancellor of the Exchequer Alistair Darling urged Goodwin to give up his pension, telling the BBC that "these excesses" cannot be justified.