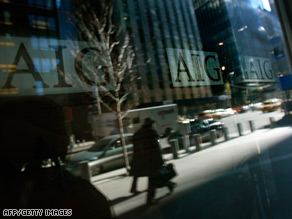 What does this all mean? What are the implications if the insurance giant folds?

Financial expert David Buik, of BCG Partners, attempts to shed some light on the gloom.

What does this loss mean?

The size of the loss underlines the gargantuan size of the business. This is absolutely massive, with huge implications for the global economy. With the latest bailout package, AIG will be responsible for $80 billion of funds from the U.S. government.

It's possible. The extra $30 billion AIG will get from the U.S. government is the equivalent of the little boy putting his finger in the dike to stop the water flooding in.

This is incredibly serious as it makes Citigroup's recent losses look insignificant by comparison.

What would happen if it did?

It would quite simply be the biggest financial disaster in history -- completely catastrophic. There hasn't been a single insurance bond trade in the world that has not had AIG's stamp on it either directly or indirectly. The whole insurance market would be trashed.

The U.S. government is desperate to ensure this doesn't happen as it would have a major ripple effect on the global financial system given the extent of its operations. Thousands of businesses and individuals with insurance policies underwritten by AIG would be left exposed.

The resulting domino effect would have obvious social implications with the unemployment rate in the U.S. for example predicted to hit 10 percent by the end of the decade.

Was the loss expected?

Yes it was. AIG has been sailing through untroubled waters for 10 years rapidly expanding its business massively. This came to a crashing halt when it slammed right into the current economic crisis. It grew too big too quickly and like so many financial institutions, it took too many risks, such as offering banks unregulated insurance contracts, known as credit default swaps.

Apart from hoping that this latest cash injection will work AIG will be trying to downsize, selling off much of its diverse range of business interests -- from real estate to aircraft leasing -- for a decent price.

That said it will take a long time for AIG to restore its battered reputation.