What would AIG's $62 billion loss buy?

(CNN) -- The monumental quarterly loss revealed by U.S. insurance giant AIG of $62 billion is the largest in corporate history, amounting to about $460,000 per minute. The loss caused jaws to hit the floor around the world and left us wondering, what else would $62 billion buy? 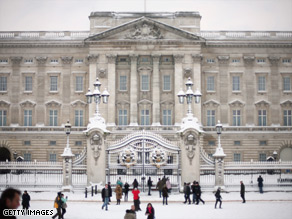 With $62 billion you could buy Buckingham Palace 46 times over.

1. It could pay off the combined national debts of China, Australia, Mexico and Ukraine, according to 2008 estimates by the CIA Factbook, and still have plenty left over for a good night out.

2. Shareholders could use the money they lost to buy a great fleet of planes. $62 billion would buy almost 250 Boeing 747 jumbos at about $250 million each, although they would need plenty left over to run them.

3. Britain's Queen Elizabeth II might not be moving any time soon, but the money could buy 46 Buckingham Palaces, according to a 2008 estimate of its market value by the Daily Telegraph newspaper. And still leave some remaining to buy her weekend retreat, Windsor Castle.

4. AIG shareholders might wish a black hole would swallow up the company's executives so why not send them into space? At $30 million a go, you could send 2,000 of them to the International Space Station -- and back if you so wished.

5. The world's 10 top-earning celebrities, including J.K. Rowling, Oprah Winfrey and 50 Cent, would only have to work for 40 years to repay AIG's losses.

6. The money would provide the income for 210 seasons of the world's richest football club, Manchester United. Although not if the players crashed their cars every week.

7. Divided equally, America's population of 303 million people would have to pay $204 each to repay AIG's losses.

8. Given an average used car price of $13,900 in the United States and an average car length of 5 meters, $62 billion will buy enough of them to create a traffic jam from New York to Beijing AND back.

9. AIG lost $460,000 per minute -- which would pay about half the annual pension of former RBS chief executive Fred Goodwin.

10. If you exchanged the $62 billion losses for dollar bills the cash would carpet an estimated 595 square kilometers -- the same approximate area occupied by Baghdad.