How to create a buzz: the business lesson for marketers

LONDON, England (CNN) -- In these economically tough times, the dream for every marketing strategist is buzz -- your product picking up ever more sales by word-of-mouth as customers talk to potential new customers, all costing your company not a cent. 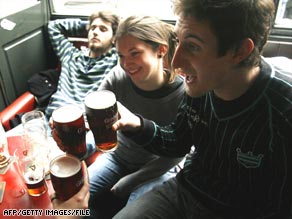 Creating a buzz: Marketers want people to talk about their products

Of course, this phenomenon is so alluring because it is also so very elusive. Companies have spent millions over the years trying to work out who in their marketplace are the "connectors," those who spread the word about a new product or service throughout their peer group.

Now, new research from a leading U.S. business school suggests that many marketing departments have been looking in the wrong place, and that these all-important opinion-formers might crop up in seemingly unlikely places.

The study, carried out by Raghuram Iyengar and Christophe Van den Bulte, both marketing professors at the University of Pennsylvania's Wharton school, along with Thomas W. Valente, a professor of preventative medicine at the University of Southern California, looked into the so-called "seeding points" for a new prescription drug. Who were the physicians, they asked, who were at the social networks, promoting the new drug widely among peers and colleagues?

The answer, they found, after mapping a jumble of points and lines representing doctors practicing in a large city and the connections between them, was unexpected. Physician 184, the hub point for information about the new drug, was not a particularly famous or distinguished name,

Instead, he was the link point between two medical communities in the city split broadly by ethnicity, one dominated by Asian names and another with primarily European names. The study also showed the doctor had seemingly exerted a significant impact on sales and use of the treatment.

"That was the biggest 'a-ha!' for the (drugs) company," said Van den Bulte. Physician 184 "was not the most important in the number of connections he was getting, but he was vitally important in linking the networks."

Technically known as "contagion", such word-of-mouth marketing is a complex business, and the study shows that many marketing departments might need to think again.

Traditionally, those seeking to create a buzz often target the most visible or publicly known members of a group, assuming that reputation directly leads to influence. However, it seems this is not always the case.

Physician 184 himself was not an immediate star, turning up on all the leading research papers and conference lecterns. However, he was well known in the local community and had a leading role in treating patients with the disease treated by the new drug.

"Physician 184 was self-effacing. He did not want to stand on a soap box," said Van den Bulte. "He was respected, but not in a flashy fashion. He was the opposite of a rock star."

Iyengar explained the wider lessons: "Our study shows that these two measures of opinion leadership do not overlap very well. Asking people how important they are is not the best measure of how important they really are. Just because people think they're important doesn't mean it's true. And some people are actually more important than marketers believe, or even they themselves believe."

The study found that so-called "sociometric" leaders like Physician 184 had more of an influence on word-of-mouth buzz than the self-reported opinion leaders, perhaps because the latter group tend to be less involved with their peers.

"The people who believe themselves to be opinion leaders are less affected by others," Iyengar said. "These are guys who say, 'I know I'm important. I don't need to care about what other people are doing.'"

The researchers have now been commissioned to produce another study to try and understand the phenomenon better -- with marketers in other industries watching keenly.

"What is happening now is that people in the pharma industry are starting to wonder how to best re-allocate their marketing efforts to leverage the power of word-of-mouth and they want hard evidence about what works or not," Van den Bulte said.