WASHINGTON (CNN) -- The global economy will shrink up to 2 percent, and rapidly approved stimulus plans worldwide could spark another crash in financial markets, World Bank President Bob Zoellick projected at a forum in Belgium Saturday. 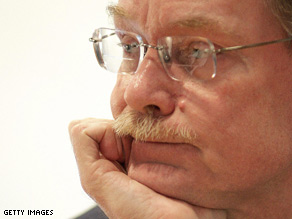 Zoellick said the World Bank, an international institution that offers aid to developing nations, projects a global economic decline between 1 percent and 2 percent.

That estimate is in contrast with an earlier 1 percent decline projected by the International Monetary Fund, a Washington-based organization formed to stabilize international exchange rates, among other duties.

Global economic recovery won't come until 2010, according to the IMF report. The world's economic powers will struggle to break even in the new year, while developing nations' economies will surge by up to 4.5 percent, the IMF said.

The world has not seen a 2 percent drop since World War II or the Great Depression, according to the World Bank.

Two of the world's largest economies, the United States and China, are struggling with recession and have recently implemented stimulus packages worth hundreds of billions of dollars.

However, Zoellick likened such stimulus plans to a "sugar high," saying they would likely lead to another crash.

"The issue now that is most important are the bad assets, and recapitalizing the banks," he said in a statement. "The reason I use 'sugar high' is that it's like if you have to have stimulus, it gives you a boost, but unless you get the credit system working again, it will drop off."