The Google guide to making it big in a downturn

LONDON, England (CNN) -- If you're graduating from school or university this year you might currently be cursing your rotten luck. The economy is weak, jobs are scarce and few companies are willing to take a chance on someone unproven. 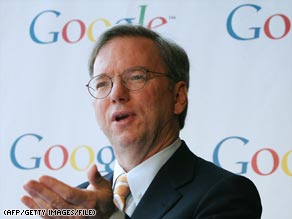 But here's the good news -- according to the man who leads one of the world's most innovative companies, you are about to be entering the business arena at perhaps the best moment for half a century.

Why? Although global economic conditions are likely to remain tough into next year, Eric Schmidt, the chairman and CEO of web giant Google, told business school students, this is the ideal time for innovators and creators to get busy with new ideas.

"Change happens when things are hard," he said at Stanford University's Graduate School of Business. "The economy and the situation that we're in now will create phenomenal opportunities that are before each and every one of you. If you think about it, this is literally the best time to graduate in 50 years. Assets are cheap, and expectations are set realistically."

The notion that the great businesses of the future often emerge from hard times is nothing new, particularly to business schools. It is notable, too, that even amid the financial crisis a series of top schools have begun expanding their faculty, with a particular focus on entrepreneurship.

According to Schmidt, who is also an adviser to the Obama administration, the huge shocks felt in the financial markets will lead to fundamental changes. "Whatever you think of the previous structure, it's just being corrected big time. And I mean big time. In one month, enormous aspects of our government are being redone."

What is the Google chief's tip for the future of business? He believes it is the field of "cloud computing", in which applications and data are stored remotely and accessed via the web, rather than kept on individual machines, for example with Google Docs or Flickr.

If you are a smart young entrepreneur, Schmidt believes, it's time to be thinking about how such data sharing can be expanded and used more effectively. "When television first came out, the first shows were radio shows on television," he said by way of comparison with early, limited efforts at cloud computing.

One likely future application could be in healthcare, both through systems which process thousands of individual pieces of data to provide early warnings of a spike in, say, flu cases, and also with a possible Wikipedia-type site for doctors to share information about treatments, he said.

"Can you imagine if you had the same thing about the financial world?" Schmidt added. "And we had been able to use that to monitor the things that happened over the past five years in the broad-based global financial industry? Think about how different we would be in terms of knowing where we are and what we have to do."

So, are you all fired up and ready to make your millions? How about a course in entrepreneurship first?

The latest chair in the subject has just been established at the U.K.'s London Business School (LBS), named after a couple who showed that business empires can sometimes emerge from the least likely sources.

In 1972, LBS management graduate Tony Wheeler and his wife Maureen dropped out of the business world to spend six months traveling overland to Australia. Arriving penniless they wrote a guide to how they made the trip, Across Asia on the Cheap, published by their own Lonely Planet imprint, which in the past 35 years has grown to become one of the world's leading travel book companies.

Now, the couple are funding the Tony and Maureen Wheeler Chair in Entrepreneurship at LBS.

"Entrepreneurship is the key to wealth creation in much of the world, and no more so than in the emerging economies, countries which were often the focus for Lonely Planet Publications' early success," Tony Wheeler said by way of explaining his decision.