'World's cheapest car' to be launched in July

NEW DELHI (CNN) -- India's Tata Motors Monday announced it would begin delivery of the Nano, billed as the world's "cheapest car", in July. 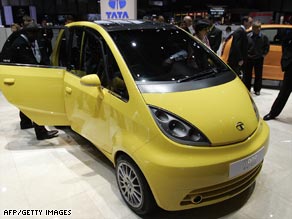 Tata Motors expects to begin delivery of the Nano, billed as the world's cheapest car, in July.

The four-door Nano is currently being built in "limited numbers" at a company plant in the north Indian hill state of Uttrakhand.

Tata Motors, however, aims to make 350,000 Nanos a year from 2010 at another unit elsewhere in the country, a company statement said.

"It is to the credit of the team at Tata Motors that a car once thought impossible by the world is now a reality. I hope it will provide safe, affordable, four-wheel transportation to families who till now have not been able to own a car. We are delighted in presenting the Tata Nano to India and the world," company chief Ratan Tata told a news conference in Mumbai to announce the "commercial launch" of the $2,000 car.

Watch more on the Nano »

Tata Motors said the Nano would initially be available through bookings or reservations filed on a request form priced around $6, or Rs 300. Tata will accept the bookings from April 9 to April 25.

Within 60 days of the closure of bookings, Tata Motors will process and announce the allotment of 100,000 cars in the first phase of deliveries, through a computerized random selection procedure, it added.

"Deliveries will commence from July 2009," said the company statement.