(CNN) -- Czech Prime Minister Mirek Topolanek shocked the normally civil European Parliament on Wednesday by warning that Washington's plans to fight the global economic crisis are "the way to hell." 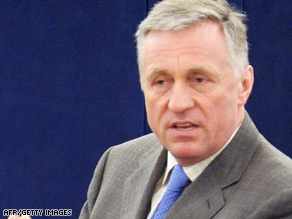 The apparently off-the-cuff remarks of the leader of a small Central European country might not normally make waves -- particularly since his parliament had pulled the rug out from under him just the night before.

But the Czech Republic currently holds the rotating six-month presidency of the European Union, making Topolanek, in some sense, one of the leaders of the 27-country bloc that is larger than the United States.

President Barack Obama plans to visit the Czech capital of Prague next week after stopping in London for the G-20 summit of leading industrialized and emerging economies.

So for Topolanek to attack the United States -- and its Treasury Secretary Timothy Geithner by name -- is a big deal.

"The path the United States has chosen is historically discredited," he said, advising Americans to "read dusty history books" so as to avoid repeating "the errors of the 1930s" and the Great Depression.

Czech analysts caution that the Topolanek quote getting the most attention -- "the way to hell" -- sounds worse in English than it does in Czech.

"It means a little something different," said Jan Machacek, an economist and analyst for the Czech newspaper Hospodarske noviny. "This is an anti-religious country. When people say hell, they say it much more lightly than people do in America. It sounds like he listens to AC/DC," the heavy-metal band.

Jiri Pehe, the head of New York University in Prague and a leading political analyst, agreed that the remark "sounds a bit more sinister in English than it does in Czech."

But Pehe made no excuses for the Czech prime minister, who he said spoke out of both ignorance and political conviction.

"He doesn't really know very much about the U.S. stimulus package, (and) he is a self-professed neo-liberal who believes that government should not intervene" in the markets, said Pehe, a long-time critic of Topolanek's center-right Civic Democratic Party.

Free-market fundamentalism may be a valid stance for the head of a small country in the middle of Europe, Pehe said, but it was inappropriate for Topolanek to express when the Czech Republic holds the EU presidency.

"He is entitled to those beliefs, but when he says that on this kind of stage -- which means it's going to travel to the United States -- it's stupid. The vocabulary he uses is unfortunate," Pehe said.

Topolanek may have been flustered, said Machacek, because his government lost a confidence vote in parliament the night before -- by a single vote. That means he and all the ministers in his government must resign, which he said Wednesday he will do. Czech President Vaclav Klaus is expected to ask Topolanek to try to form a new government.

Machacek also said Topolanek's criticism of the U.S. stimulus plan may be based on purely local experience.

"His perspective is influenced by the Czech experience. This is a small open economy, where the stimulus would not be effective," he said. "With a stimulus here, people would save it or buy foreign goods -- (which would) stimulate (other countries') economies," rather than the Czech one.

"He should be much more careful, not speaking about the Czech experience, but speaking from the EU perspective," the economist added.

That said, Machacek argued, Topolanek's position is not completely outside the pale in the European Union.

"The Czech perspective doesn't differ that much from the German position," he said. "But the Germans would never be so undiplomatic."

All About Timothy Geithner • Czech Republic