LONDON, England (CNN) -- A warning of more attacks on UK bankers was made on Wednesday after the home of former Royal Bank of Scotland boss Fred Goodwin was vandalized. 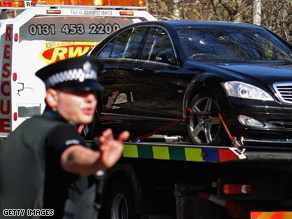 A recovery vehicle removes a Mercedes from the Edinburgh home of Fred Goodwin.

Windows were smashed in Goodwin's house in the Scottish capital Edinburgh and those of a Mercedes-Benz limousine parked outside.

It is not known if anyone was at home at the time. Goodwin -- dubbed "Fred the Shred" by the media for his ruthless cost-cutting -- and his family have not been living in the house since it was revealed that the 50-year-old Goodwin was receiving an annual pension of $1 million (£700,000) for life.

A statement issued to media organizations including the Press Association after the attack said: "We are angry that rich people, like him, are paying themselves a huge amount of money and living in luxury, while ordinary people are made unemployed, destitute and homeless.

"Bank bosses should be jailed. This is just the beginning."

No group was named in the message and it did not explicitly claim responsibility for the attack.

Goodwin took early retirement after RBS nearly collapsed amid the economic crisis and was later part-nationalized.

Politicians and commentators have expressed fury about the deal and excessive bonuses being given by bailed-out banks.

Britain's Chancellor of the Exchequer Alistair Darling, head of the Treasury, urged Goodwin to give up his pension. He refused, saying he had already given up a number of contractual rights which had cost him a lot of money.

The statement warning of more attacks on bankers came days after AIG sent a memo to employees giving them security advice as fury grows in the U.S. over millions paid out in bonuses by the bailed-out U.S. insurance giant.

Employees were warned not to wear the company logo, to travel in pairs and park in well-lit places, and to phone security if they notice anyone "spending an inordinate amount of time near an AIG facility."

AIG employees have received death threats since the company handed out $165 million (£115 million) in bonuses and security at AIG offices has been increased.

And last month British police warned that officers were preparing for a "summer of rage" as protests mount across Europe against the economic crisis.

Hartshorn said the G-20 economic summit starting next week could lead to unrest as leaders of the world's richest nations head to London.

All About The Royal Bank of Scotland Group plc • Alistair Darling