(CNN) -- French workers on Thursday freed the manager of a factory run by U.S. company 3M held hostage in his office for more than 24 hours in a labor dispute over terms for laid-off staff. 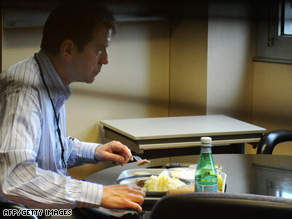 The manager of 3M's French operations, Luc Rousselet, eats in his office while he was held hostage.

"We have an agreement with 3M that they will provide the means to respond to our demands," union representative Jean-Francois Caparros told news agency AFP.

"The negotiations will resume and that's a very good thing," said Rousselet as he left an office where he took refuge on Tuesday afternoon.

"I am very happy for the employees of the Pithiviers factory. I know that this was a very difficult lay-off plan for them," he said as workers shouted "Scoundrel boss!" Is there any justification for taking this action?

The 3M factory at the center of the dispute makes pharmaceutical products and employs 235 people. Of those 110 are being cut this year and 40 more are being transferred to another plant.

Rousselet was briefing the laid-off workers about a compensation package but retreated to his office after feeling threatened.

Maryse Bulte, 44, one of the employees, said: "Initially we didn't want to hold him. We just sought talks and concrete results.

"It was despair and distress which made us do this," added Cyril Foufelle, 36.

The manufacturer 3M, based in Minnesota, has announced thousands of job cuts around the world amid the economic downturn.

Anger has been growing in the U.S. and Europe over job cuts and high bonuses for executives whose companies have been rescued with taxpayers' money.

And last week angry tire factory workers threw eggs at their bosses in a protest over the closure of their plant.

The drama at Pithiviers, about 80 kilometers (50 miles) south of Paris, came as figures showed the number of jobless in France rose nearly 80,000 in February to reach 2.38 million.

More than a million striking workers protested last week urging President Nicolas Sarkozy to do more to protect their jobs.