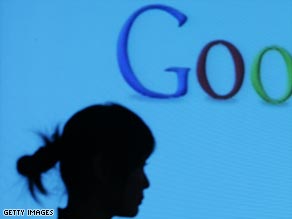 That's the idea behind Google's latest move to allow users to download free music in China. Google has partnered with a Chinese company, Top100.cn, to make it happen.

Most Chinese users get their music for free anyway, thanks to rampant online piracy. Google and its partners hope the new business model will generate revenue from advertising that all will share. More importantly, Google wants to increase traffic and catch up to its competitor Baidu.

Baidu offers a popular search feature, which, despite lawsuits from many labels, enables users to download music through third-party sites.

Will Google's move pay off?

So far, Chinese music is topping the list of most popular downloads, including top artists Jolin Tsai and Liang Lin. But Western music isn't far behind. Favorites are "My Life Would Suck Without You" by Kelly Clarkson, the Backstreet Boys hit "I Want It That Way" and Sarah Brightman's rendition of "Scarborough Fair."

Brightman, who co-performed the theme song at the opening ceremony of the 2008 Olympics in Beijing, is a longtime favorite among Chinese fans.

Google offers about 350,000 free songs, but says more than 1 million will be available soon. The company also provides user-friendly searching and song lyrics, and recommends music based on a listener's preference.

Several students at a cafe in Beijing say they have tried the service.

It's no surprise that China's gregarious Internet community is having a heated discussion.

"It's good quality, but there aren't enough songs," another blogger said. "It's better than buying it, though."

Some rushed to Google's defense.

"You can't really compare Google with other sites, because all of their music is legitimate," one blogger said. "They pay those music labels for every download. Baidu and others all use pirated music."

Will Baidu make the next move?

If the Chinese search site doesn't cooperate with music companies, it could be seen as "basically aiding and abetting pirates," he added.

"But if there is a better service offered by Google ... then Google will threaten Baidu and Baidu will have to respond," Clark said.