NEW YORK (CNNMoney.com) -- Internet search company Yahoo Inc. announced Tuesday that it would slash 5 percent of its workforce, as it reported a first-quarter profit that fell sharply from a year earlier but still managed to beat Wall Street's forecasts. 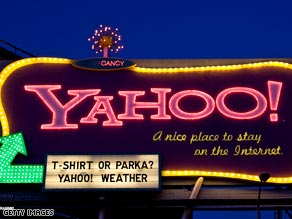 Yahoo will turn out the lights for 5 percent of its workforce.

The company's layoffs will affect about 675 employees, according to the company. Yahoo said those being affected in this latest round of cuts would be notified within the next two weeks. Last year, the company cut about 700 jobs on a net basis.

Yahoo would not say exactly what kind of jobs would be lost, but Carol Bartz, the company's new chief executive, said quite emphatically that the company's current management structure is inefficient.

"You have three people telling project engineers what to do, and nobody's f---ing doing anything," Bartz said on a conference call with analysts. "We have to ... get them focused on the right stuff. That's the most important thing Yahoo's going to do to become a big, strong, growing company."

The layoff announcement came as the company reported its net income fell to $118 million, or 8 cents per share, down 78 percent from a year earlier. Year-ago results included significant one-time gains from an investment in Chinese Internet stock Alibaba.com.

Without the gains, and excluding one-time charges in the first quarter of 2009, Yahoo said it earned 15 cents per share, down 17 percent from a year ago. Analysts polled by Thomson Financial, who typically exclude one-time items from their estimates, had anticipated a profit of 8 cents per share.

"Yahoo! is not immune to the ongoing economic downturn, but careful cost management in the first quarter allowed our operating cash flow to come in near the high end of our outlook range," said Bartz.

Yahoo has been actively trimming costs under Bartz, who replaced Yahoo co-founder Jerry Yang on Jan. 13. Yahoo offers scores of products, including e-mail, fantasy sports and personal ads, in addition to its search tool, but Bartz has pledged to create a leaner, stronger Yahoo that can better compete with rivals Google (GOOG, Fortune 500) and Microsoft (MSFT, Fortune 500).

The company expects its cost reductions will help lift sales as soon as the second quarter, for which Yahoo is forecasting revenue between $1.425 billion and $1.625 billion. That's much higher than analysts' expectations of $1.22 billion, and it would trump the $1.35 billion in sales from the second quarter of 2008.

At a conference with investors in March, Bartz said she wanted to make Yahoo more open and social, as online search has been transformed by social networks like Facebook and Twitter. Despite attracting more viewers and time spent on its Web site, Yahoo has struggled against both of its chief competitors lately. The company's page views grew by only 8 percent in the quarter -- the slowest growth rate in the past five quarters.

"While we experienced pressure in both display and search advertising in the first quarter, we believe Yahoo! remains one of the most compelling advertising buys on the Internet," said Bartz. "We must begin gaining share."

Analysts believe that trimming costs will help Yahoo achieve a focus that it has lacked under its previous CEOs, but cautioned that the company will have difficulty catching up to its competitors.

"By cutting a number of projects, you can keep them manageable and focus around a strong set of core products instead of sporadic, disconnected efforts," said Allen Weiner, an analyst who follows Yahoo at tech consultancy firm Gartner. "It's a smart move on their part, but Google is doing same thing."

Last Thursday, Google posted impressive first-quarter earnings, even amid a difficult advertising environment. Google's ads are mostly text-based, while Yahoo focuses more on display ads -- also known as graphical or banner ads -- which some analysts believe are more likely to be affected by an economic downturn. That's largely because the companies that buy display ads are predominately big firms in currently slumping sectors such as automotive and financial.

And while Yahoo successfully fought off Microsoft's $43 billion offer to acquire it -- which lasted the better part of 2008 -- most analysts saw that as a missed opportunity to sell high, as the company is worth less than half that amount now.