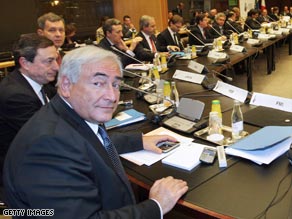 The IMF, led by Dominique Strauss-Kahn, gave a sober forecast for 2009.

The IMF called it "the most severe recession since World War II."

A modest recovery is predicted for 2010, but at 1.9 percent would be "sluggish relative to past recoveries."

"These projections are based on an assessment that financial market stabilization will take longer than previously thought, even with strong efforts by policymakers," Oliver Blanchard, IMF chief economist and Jose Vinals, head of the IMF's monetary and capital markets department, said in a joint statement.

"Thus, financial conditions in the mature markets are projected to improve only slowly, as insolvency concerns are diminished by greater clarity over losses on bad assets and injections of public capital, and counter-party risks and market volatility are reduced."

The agency, which represents 185 member countries, predicts that global unemployment levels will rise through 2010 before receding. Developed economies such as North America and Western Europe are expected to contract 3.8 percent in total.

Meanwhile, emerging economies such as China and India are projected to grow, albeit more slowly at 6.5 percent and 4.5 percent, respectively.

Despite the growing financial might of China and India, gains there cannot make up for large contractions in more established economies.

"Remember, we're starting at very low levels of income still in China ... still per capita income of about $1,000 a year," Joseph Zveglich, assistant chief economist at the Asia Development Bank, said in a recent interview.

"Although they have higher rates of growth, it's hard to compare that to the West, where a 1 percent or 3 percent difference (in economic growth) is substantially more" money.