MADRID, Spain (CNN) -- Spain's jobless rate rose sharply, to 17.36 percent in the first quarter, with just over 4 million people out of work, the government said Friday. 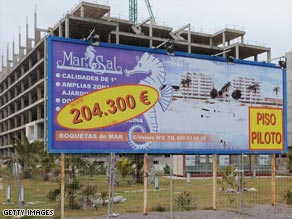 The collapse of the real estate boom in Spain has driven unemployment rates to record levels.

Nearly half of the 4 million lost their jobs in the past year, the National Statistics Institute said.

The numbers did not surprise economists, who have been tracking steady increases of monthly jobless raw numbers from the government. But Spain's official jobless rate is revised only every quarter.

Spain's previous rate of 13.9 percent, issued early this year for the fourth quarter of 2008, already was the highest in the European Union.

When Spain's jobless figure earlier topped 3 million, officials predicted that it would not reach 4 million.

Socialist Prime Minister Jose Luis Rodriguez Zapatero recently shuffled his Cabinet, replacing the finance minister and others, seen as a move to boost the economy.

Zapatero predicts that public works subsidies distributed across the country will soon produce tens of thousands of jobs.

Spain's once-booming construction industry has been battered by the global economic crisis. But the latest government report shows more jobs were lost in the last quarter in the services sector, another pillar of Spain's economy.

The number of temporary workers declined in Spain, the government said. But economists say that's because companies lay off those workers first. It costs a business in Spain about three times more to lay off a full-time tenured worker.

Increased unemployment was seen across all sectors and across the country, with the urban areas around Madrid, Barcelona and Valencia hit hard, the government said.