(CNN) -- While the swine flu raises public-health alarms globally, the prognosis for the world economy is not good if the outbreaks mutate into a pandemic. 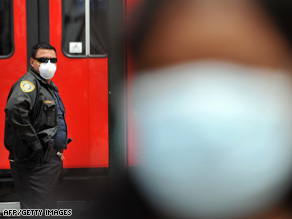 A transport security officer looks on near the U.S.-Mexico border in San Ysidro, California, on Monday.

If there's a pandemic on the level of the 1918 "Spanish" flu, a 2008 World Bank analysis says, it would cost the world economy $3.1 trillion and drop the world's gross domestic product by 4.8 percent in the first year of infection.

On the bleeding edge of a global outbreak would be travel-related companies such as hotels and airlines, restaurants, mass transportation and nonessential retail shopping. In a worst-case scenario, air travel, tourism and restaurants would see a 20 percent drop in business, the report said.

Economies dependent on tourism -- for instance, Macau, the "Las Vegas of Asia," -- would be especially hard-hit. "We did a risk assessment for the city of Macau, and we found the greatest risk to the economy wasn't things like organized crime," said Steve Vickers, CEO of International Risk. "The biggest risk for the city was a bird flu-like pandemic."

The economic impact can be broken down into three phases: economic loss due to deaths; work absenteeism; and avoidance behaviors, such as reducing air travel, visits to shopping centers and public events, or any activity that draws large groups of people. Ultimately, losses as a result of "avoidance behavior" would be the most costly to local economies -- nearly two-thirds of total losses, the World Bank estimates.

Experts say the actual costs both in terms of human life and local economies might be very different, depending of the severity of outbreak and the preparedness of communities.

The cost of fighting a pandemic would be further strain for a world already reeling from a banking and financial crisis that the International Monetary Fund estimates will cost $3 trillion.

The confluence of events is similar to what the Hong Kong economy faced when struck by SARS six years ago. Buffeted by the implosion of the dot-com bubble and the September 11, 2001, terrorist attacks, Hong Kong unemployment hit a record 7 percent just as SARS began quietly spreading in nearby Guangzhou province in late 2002.

By April 2003, airline travel to the city fell by 77 percent and retail sales fell by 15.1 percent, Hong Kong University researchers say. "There are a lot of estimates out there, but it cost the economy something like $40 billion," said influenza researcher K.Y. Yuen. "It had a horrendous impact on the economy."

The long office hours of Hong Kong residents added to the outbreak, said Cecilia Chan, director of the Centre on Behavioral Health at the university.

"For workaholics in Hong Kong, it was tough to think of it as a public health responsibility to go home if they're sick," she said.

While a global outbreak during a global recession threatens to make a sick economy even worse, the downturn could help prevent the spread of disease because of the reductions it has spawned in air travel and shopping.

All About Influenza • Contagious and Infectious Diseases • Air Travel • Transportation