(CNN) -- When CEOs and professional investors in developed economies go to bed these days, some may pray for protection from markets in turmoil, share prices in the cellar and angry financial gods bringing fire and brimstone with every check of their Bloomberg terminal or the front pages of The Wall Street Journal. 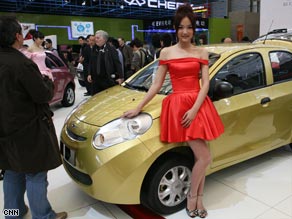 Multinational automakers and other global companies are banking on Chinese consumers.

The dream of China is the life preserver many multinational corporations are clinging to, not without some reason. The recent Shanghai Auto Show perhaps showed that like no other. More than half a million people attended, including 1,500 automotive manufacturers from around the world.

Carmakers decided to use Shanghai as the launching point for 13 new models, most notably Porsche introduced its first four-door sedan, the Panamera, flanked by Chinese models and surrounded by a rapturous crowd of the world press. It's telling that such an important debut took place in China, rather than the company's home in Stuttgart-Zuffenhausen, where the German automotive industry is being buffeted by the high winds of the credit crisis.

While the Big Three from Detroit are fighting for their lives, China has more than 100 domestic car makers competing with multinational carmaker to get a piece of the growing Chinese car market. For the first quarter of the year, 2.7 million cars were sold in China -- besting U.S. sales of 2.2 million for the first time to become the world's largest car market.

General Motors may be on the verge of filing for bankruptcy protection, but it has one bright spot on its balance sheets - China, where sales are expected to rise 17 percent this year, according to Kevin Wale, chief executive of GM China. While analysts predict global car sales WILL fall more than 8 percent this year, sales in China grew 10 percent in March, according to the Chinese government. "You have to be here, and you have to be here in a serious way," Dieter Zetsche, Daimler CEO, told CNN.

Watch Daimler's CEO explain why China is a bright spot »

The automobile industry's hopes for China are emblematic for nearly every industry in the world. A Nielsen consumer confidence index shows Chinese consumers are more optimistic than most consumers elsewhere, rating 89 points compared to the global average of 77.

But all is not well in China. Before Lehman Brothers went belly up last September, an open question among financial academics was the issue of "decoupling"- the belief that developing markets such as China could absorb a drop in export business with increased domestic spending. But the ripple effect of Lehman's collapse created uncertainty -- growth in China is expected to drop to 6 percent this year from an average exceeding 10 percent in recent years, experts say.

Asia could be the best hope to save an auto industry in crisis. CNN's Andrew Stevens is your guide for a look at the innovative strategies and solutions from the Shanghai Auto Show.

While that may sound enviable to Western companies, analysts say China needs 8 percent growth to maintain current employment levels. "For a while it seemed China was relatively immune to the impact of the credit crisis, then the collapse of Lehman Brothers showed it wasn't," said Joseph Zveglich, assistant chief economist at the Asian Development Bank.

And even as Western companies clamor for the China market, it's an open question of whether Chinese consumers - be they nouveau riche or just emerging from poverty - are interested in foreign goods. But let's not forget the annual per capita income in China is just $1,000.

"There is a misconception that Western companies are good at penetrating the Chinese market," said Frederic Neumann, a senior economist at HSBC. "We see a lot (of penetration) in the auto sector and top end of the luxury market, but if you look at broad Chinese consumption trends, Western companies don't have the cachet" of local Chinese brand names.

"We see the top-end (consumer spending) weakening and consumption moving inland ... which suggests the best placed companies will be Chinese companies themselves, not Western multinationals," he said.