Is the worst of the economic downturn over?

LONDON, England (CNN) -- The worst troughs of the global economic downturn could be over, although there remain risks ahead, according to the man who spearheaded perhaps the most complete study yet of the genesis of the current financial crisis. 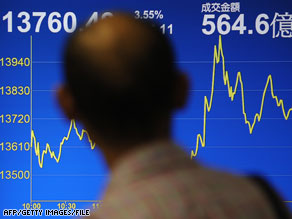 On the rise? Stock markets have shown some signs of recovery

Thomas F. Cooley is Dean of the NYU Stern School of Business, which delivered its swift response to the financial turmoil, a collection of 18 papers examining different aspects of the phenomenon, to 100 leading U.S. policymakers, including inside the Obama administration, Congress, the Federal Reserve and financial regulators, bringing an appreciative response.

Cooley, who organized the production of the papers by 33 members of the Stern faculty over a period of just six weeks, told CNN he believed that recent sharp rises in stock markets could herald the beginnings of a wider recovery.

"There are distinct signs of a recovery in the U.S. economy, parts of Europe and elsewhere. There is a definite sense that the worst is over," he said. "But there are still many risks in the system, and we need to be cautious in what we evaluate because a lot of the problems aren't being addressed.

"For example, the recovery of the labor markets will be slow, partly because of the effects of monetary policy and the stimulus package."

Cooley organized the finance and economic staff into rapid and coordinated action in November in an attempt to address the what he describes as "clearly the worst financial crisis since the Great Depression."

By mid-December, what were termed the White Papers were being delivered to policymakers, looking into subjects including banking, credit ratings, hedge funds and regulators, as well as bailout efforts.

Cooley says he decided to act after receiving a series of outside requests for assistance in understanding what was taking place.

He said: "Our faculty was tapped many times to provide analysis of the events, and it was logical to move from analysis to discussing solutions.

"The scale and scope of the financial failures gave our collective work a sense of urgency."

In another expression of guarded optimism, Cooley says that while the initial crisis was the worst since the Great Depression, the wider picture is very different.

"The economic consequences are not as severe, nor will they be, as compared to the 1930s," he said. "That is because we have a better understand and better tools, and because governments and central banks around the world have been very proactive in addressing issues."

As well as potentially guiding policy, Cooley adds, the project brings added value to Stern's students, some of whom are now studying the issues as a new part of the MBA program.

"This was the ultimate teachable moment for our students to understand what went wrong and why," he said.

"Understanding what went wrong is critical to addressing the underlying issues and putting in place mechanisms so that they won't happen again."

And now to the big question -- how did the banking crisis happen at all? One element, Cooley says, is the sheer complexity of many modern banking techniques and the lack of proper oversight in how they operated.

"As is clear from the events of the past year, this has been a disgraceful failure of risk management."