LONDON, England (CNN) -- Picture this: You work for a racing car company that needs to raise $18 million in sponsorship. Do you go with a reliable sponsor that can only offer part of that sum, or take the full $18 million from a company getting bad press for selling arms to a Middle Eastern country? 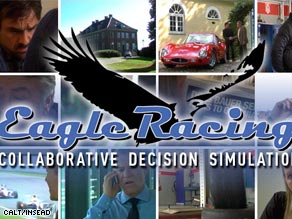 It was developed at the Center for Advanced Learning Technologies (CALT), run by business school Insead, and it's an example of the kind of simulation used by business schools and companies wanting employees to hone their business acumen.

Realistic simulations can teach general skills, like decision making, or allow participants to try their hand at all manner of specific business disciplines, be it finance, accounting, marketing or human resources.

Dr Annette Halpin is Vice President of the US-based Association for Business Simulation and Experiential Learning, and chair of Business/Health Administration and Economics at Arcadia University in Pennsylvania. She says that computer-based business simulations are now widely used on MBA courses.

"Simulations are becoming increasingly important in business education because they create a reality for students that can't be taught by textbooks," she told CNN.

But simulations aren't only used by business schools -- they are equally in demand with companies wanting to arm employees with new skills.

BTS is an international company that produces simulations for clients including Coca Cola, Procter & Gamble and ING.

Willem Pennings, a Senior Consultant at BTS, told CNN that businesses approach BTS to request custom-made simulations that replicate the way their business functions or that teach specific skills. A custom-made BTS simulation can cost a business anywhere between $500,000 and $800,000.

While the exact nature of any simulation depends on a company's requirements, Pennings says they are often designed to give participants a holistic view of their business, allowing executives to experience how other departments function, without having to actually work in those departments.

He gives the example of a simulation that lets someone who works in marketing make financial decisions so that they develop a better understand budgeting issues.

According to Pennings the advantage of simulations over other teaching methods is that they let users apply the theoretical knowledge they have learned. And he says the economic downturn has benefited BTS as businesses focus on training their staff to be more efficient and more aware of profitability.

Professor Albert Angehrn works at CALT, in Paris, where he develops interactive technology for management training. The simulations developed at CALT are widely used in business schools and by companies including IBM and BMW.

"Simulations are seen as an important component of management development because they put people directly into a scenario, and that means there is stress and emotion," he says.

Angehrn says that business simulations have traditionally taught more quantitative skills -- for example a finance or marketing simulation might allow participants to work out how much money should be allocated to advertising.

But now simulations have been refined to teach more "soft skills," addressing people dynamics, such as driving change in organizations and making companies more collaborative.

He adds that while simulations are suitable for individual learning, their real value comes when they are carried out in groups, with participants from different disciplines working together and sharing knowledge.

The internet has revolutionized the way business simulations are used. Where an administrator once had to manually input the participants' in-game decisions into a computer, users can now input their own decisions online. Online simulations allow employees from different companies to take part in the same simulation and can add an extra dimension to online MBA courses.

Angerhn says there is a trend towards "massive" online simulations that allow hundreds of users to simultaneously participate in a scenario. He says these are popular with big organizations, such as IKEA, that want to rapidly increase know-how across the company.

As for the future, Halpin thinks that business simulations will become more immersive, incorporating the visual elements of virtual worlds like Second Life. That could provide an even more realistic experience, and if the old adage is to be believed, experience is the best teacher.