Reports: China to require all PCs to have site blocking software

HONG KONG, China (CNN) -- The Chinese government will require all PCs sold in China after July 1 to include software that blocks "harmful" content, news reports said on Monday. 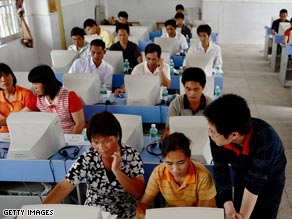 The rule, released on May 19, will require all computers to have "Green Dam," a software program that is designed to block pornography sites, the Wall Street Journal reported.

The software must either be preloaded on hardware or enclosed on compact disc with the computer, the report said.

Industry observers fear the software could be used to bring China's "Great Fire Wall" down to the desktop level.

"Why wouldn't we be suspicious about a government saying all computers must be sold with this particular software from this particular company?" said Charles Mok, chairman of the Internet Society of Hong Kong.

Green Dam is produced by Jinhui Computer System Engineering Co., which has ties to China's military and security ministry, the report said.

Company founder Bryan Zhang told the Journal the software is similar to parental control software in other countries and will transmit banned Web sites to computers similar to antivirus updates.

Learn more about how China monitors the Internet »

A spokesperson for Hewlett-Packard Co. in Singapore confirmed to Bloomberg News that China has told them to include web site blocking software.

Mok of the Internet Society fears the software could be used to stop use of software such as onion routing systems that protect anonymity and circumvent router-based site blockage.

He says requiring software be sold in all PCs could have a chilling effect on end users. "Whether or not they are really monitoring you, they are still sending a message you might be watched," he said.