LONDON, England (CNN) -- More than six hundred workers at Total's Lindsey oil refinery in Northern England have been told they no longer have jobs after staging what the company calls an "unofficial, illegal walk out." 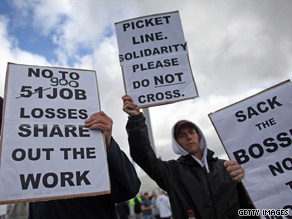 The steel workers started striking last Thursday after one contractor axed 51 jobs while another employer on the same site was recruiting.

The dispute has prompted a number of wildcat strikes at power stations and oil refineries around the United Kingdom.

The workers' union GMB, which represents around half of the sacked workers, estimates that, as of late yesterday, up to 4,000 other workers at four power stations and three oil refineries had walked off the job in sympathy.

Early this afternoon, Total confirmed that negotiations had started between the workers' employers and ACAS, the British Advisory, Conciliation and Arbitration Service.

Earlier, in a statement posted on its Web site, Total announced that its contractors had started the process of ending employment contracts for 647 workers on the HDS-3 construction project.

The statement said the project has been temporarily shut down and that all employees had until 5pm on Monday to reapply for their jobs.

Phil Davies, national secretary and head of the manufacturing section at the GMB Union, told CNN the invitation to a job interview would only stoke workers' anger. "I think that would just humiliate people to be quite honest and it will put their backs up and make them more determined to win it," he said.

He said union representatives were in the process of gathering information to hold an official industrial ballot, a process that could take six weeks.

The British Press Association published one sacked Lindsey worker's appeal for support from fellow union members: "We are asking for support from workers across the country which I am sure will be given. Total will soon realize they have unleashed a monster."

Workers at the Lindsey oil refinery walked off the job for more than one week in early February to protest against the hiring of hundreds of foreign workers.

They returned to work after the unions and the company gave assurances that half the jobs would go to British workers.

All About TOTAL SA • Oil Production and Refining