LONDON, England (CNN) -- For almost four months, fans of Michael Jackson were holding what were deemed by concert promoters AEG Live as the "Hottest Tickets on the Planet." 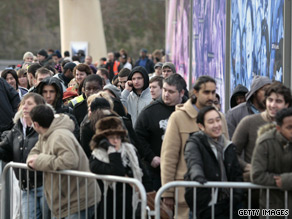 Queues for tickets to Michael Jackson's concert wind outside the O2 Arena in London on March 13, 2009.

Now some 750,000 would-be concert-goers have been left with slips of paper that, while steeped in sentimentality, won't entitle them to see the hyped spectacular that was promised to be Jackson's farewell concerts.

It's unclear whether all fans will receive a full refund. Early Friday morning, AEG Live's Web site was still promoting the concerts, announcing there were just "17 days until show time." After midday, all reference to the shows had been removed.

Late Friday afternoon, the O2 Arena was still saying that ticketing information would be available "in due course." And callers to Ticketmaster's customer service number were still being greeted the message, "Ticketmaster is aware of the news relating to Michael Jackson. We have no official information at this stage. As soon as we have any information we will immediately contact all customers who have booked tickets through Ticketmaster."

Seatwave, Europe's biggest online market for fan-to-fan ticket sales, told CNN that customers who bought tickets via its Web site would receive a full refund, the cost of which would be covered by an insurance claim which could top £2 million ($3.2 million).

"This is what you buy insurance for. Unfortunately it's always for these kind of terrible circumstances," Joe Cohen, Founder and CEO of Seatwave told CNN.

Consumer rights group Which? warned fans who bought tickets from third parties, including auction Web sites such as eBay, may have more difficulty getting their money back.

Michael Jackson was scheduled to play 50 shows at the O2 Arena in London, a grueling schedule for even the fittest pop star, according to celebrity media advisor, Simon Astaire.

"He needed money, there is no question about that, hence his 50 dates at the O2. It's easy to say today and I think one has to be respectful today, but it was a stretch to do 50 concerts in the way he wanted to do in that time frame. Even for the fittest, most grounded individual it's very, very difficult," he told CNN.

According to estimates by "Billboard," unconfirmed by the promoters, Jackson's concerts would have netted the singer $50 million in ticket and merchandise sales.

Back in March, tickets for an initial run of ten concerts sold out at the astonishing rate of 11 tickets per second, a feat Chris Edmonds, the Managing Director of Ticketmaster UK called a "live entertainment phenomenon."

Demand for the tickets prompted organizers to add another 40 dates to the schedule. The London shows were to be the first step in a multi-phase package with Jackson, including plans for a 3-D live concert film and a 3-D movie based on Jackson's "Thriller" music video.

It's not known at this stage how much of the cost of Jackson's canceled concerts will be shouldered by promoters AEG Live. The company is yet to issue a statement on the matter.

It is thought only part of Jackson's 50-date London engagement was covered by insurers. One of those was Lloyds of London, whose spokesman Louise Shields told CNN "any losses are not likely to be significant."

Mary Craig Calkins, partner at Howrey law firm in Los Angeles told CNN it was likely Jackson was covered by essential element insurance, a common form of cover in the entertainment industry to guard against losses associated with the main act.

The policy would normally cover ticket sales and production-related expenses. "He was hiring dancers for the production, there's pyrotechnics, there's the music, there's the equipment, there's the venue, " Calkins told CNN.

AEG Live's partner in Jackson's stage comeback, Tom Barrack, Chairman of Colony Capital, posted a statement on the company's Web site, saying they were "deeply saddened" by Jackson's death. A spokesman for Barrack declined to comment on the financial implications, saying "they're not even focused on that, it's a personal loss."

Barrack was involved in a deal to save Jackson's Neverland Ranch when the singer's debts became overwhelming.

Jackson's sudden and unexpected death has sparked a surge in demand for his recordings and memorabilia. Since his death, hundreds of items including albums, posters and T-shirts have been listed on auction Web site eBay. And sales of his recordings have skyrocketed in shops and on music download sites.