(CNN) -- Cellphone users in the European Union will enjoy significant savings when "roaming" within the bloc's 27 member states from Wednesday with the introduction of new pricing rules. 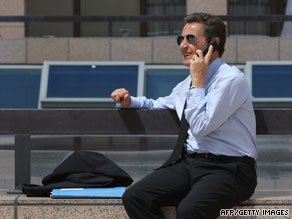 Seasoned travelers such as French President Nicolas Sarkozy can make cheaper calls when "roaming" from Wednesday.

Cellphone operators are also required to bill their customers by the second after the first 30 seconds of a call, rather than per minute -- a measure the Commission says will cut phone bills by 20 percent.

Meanwhile the cost of sending SMS text messages and using phones to connect to the Internet or download data, such as e-mails or data, has fallen even more sharply.

The measures are designed to protect customers such as a German man who downloaded a television program while visiting France and was billed €46,000 by his cellphone operator.

Overall, the Commission claims the new roaming rules could save users up to 60 percent on their bill.

In a statement, EU Telecoms Commissioner Viviane Reding said the European Commission had put a stop to the "roaming rip off."

"These are all steps no one country could have taken on their own," Reding added. "In times of economic crisis, policy makers need to give a helping hand to consumers so that they get better value for their money and industry benefits from increased consumer confidence."

Customers will also be able to choose a cut-off limit if their bill reaches 50 euros, or set a higher limit.

Roaming cellphone charges have been falling in the European Union since 2007 when the costs of making phone calls abroad were on average four times more than domestic calls, according to EU figures.