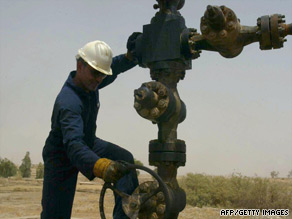 The joint BP-CNPC bid was for the al-Rumeila oil field, one of the largest in the world. The energy companies are expected to increase production at the oil field by 50 percent, to 285,000 barrels a day, for a service charge of $2 for each additional barrel produced, al-Dabbagh said in a statement.

The Iraqi government rejected bids for five other oil fields and a natural gas field because the bidders did not agree to the service charge set by the Ministry of Oil, he said.

The Ministry of Oil rejected the idea that the failure to award more than one contract made the much-anticipated auction a flop.

Iraq did not say how much the BP-CNPC bid was worth. It runs for 20 years.

Oil Minister Hussein Shahrastani chaired the government-sponsored auction for the oil and natural gas field contracts Tuesday, after a day's delay due to a sandstorm.

Much of the auction was broadcast live on state television, which Ministry of Oil spokesman Assem Jihad told CNN was a sign of the transparency of the process.

He said the government was satisfied with the auction, even though only one contract was awarded, because the contract was for Iraq's largest oil field.

Iraq plans to open bidding this year on 10 more oil fields and one natural gas field, all of which are undeveloped, Jihad said.

The companies whose bids were rejected Tuesday have been given time to review their offers, he said.

Iraq has some of the largest oil reserves in the world, with an estimated 115 billion barrels -- tying Iran for second place, behind Saudi Arabia's 264 billion barrels, according to estimates from the Energy Information Administration in the United States.

CNN's Jomana Karadsheh in Baghdad contributed to this report.