Green business blog: Change in the wind for power firm

During CNN's "Going Green: Green Light for Business" coverage, we've asked businesses to tell us how they balance the imperative for profit with environmental concerns. Anders Eldrup, CEO and President of DONG Energy, tells us about the company's plans to switch its reliance from fossil fuels to renewable energy.

There are many reasons as to why coal today is the dominant fuel in power generation. In coal many countries found a way to alleviate the extreme dependence of Middle East oil after the 1970's oil crisis. 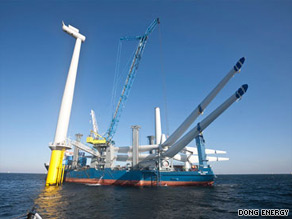 Horns Rev II will be the world's largest offshore wind farm when it opens on September 17, 2009.

DONG Energy wants to turn the numbers around within one generation, so that 85 per cent of our energy production is carbon neutral. We call the vision 85/15.

At present we are formulating the strategy through which our vision will be achieved. The strategy is to create growth and reduce CO2 emissions at the same time, and key elements will be increased efficiency and more biomass and wind energy.

Efficient power plants
Energy efficiency is an often overlooked method of reducing emissions. DONG Energy's power plants rank among the most efficient with efficiency rates of up to 47 percent and we constantly work to improve efficiency. Furthermore, the central power plants are combined heating plants that channel excess heat from power production to consumers for domestic heating. Such use of energy elevates efficiency rates to 94 percent.

Biomass in power plants
To further bring down emissions high efficiency must be supplemented by renewable fuels such as biomass. Already today, Danish power plants use half of the straw from Danish agriculture in our power plants along with increasing quantities of wood chips and wood pellets.

Wind power works
Today, DONG Energy has built half of the world's offshore wind mills and wind energy will be an important contribution to achieving the 85/15 vision. Off the coast of Western Denmark, DONG Energy is completing the construction of the world's largest offshore wind farm, Horns Rev II. When it opens on the 17th of September this year, its 91 windmills will generate enough power to supply 200,000 households.

Green transport
The uneasy companion of large quantities of wind power is great variation in power production due to the intermittency of wind. Electric cars can help absorb the surplus power production when energy production is high because of strong winds and when energy consumption is low at night. More electric cars simply mean more wind energy. In addition, electric cars can reduce the rapidly growing CO2-emissions from the transport sector. DONG Energy is developing the infrastructure and technology that will allow for cleaner and more intelligent forms of transportation.

The role of politics
These are key elements in our strategy to simultaneously pursue growth and reduce CO2 emissions. But politicians must contribute by creating a political framework that aligns economic growth and climate mitigation. Concerns over growth and over climate change mitigation should not have to be balanced. They should be integrated.

On one hand, politicians must create economic incentives by ensuring a high price on CO2 and a global carbon trade system shared by all developed countries. On the other hand, politicians must formulate ambitious car-emissions standards, building codes etc. The first step towards aligning growth and climate concerns has to be taken in Copenhagen in December this year.