BEIJING, China (CNN) -- A Chinese factory that makes iPhones said Wednesday that it has suspended several staffers after an employee committed suicide, apparently under duress when a prototype went missing. 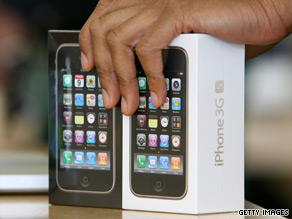 Foxconn manufactures the popular iPhone for U.S.-based Apple in China.

Sun Danyong, 25, jumped off the 12th floor of the Foxconn Science and Technology Group in the southern city of Shenzhen last week.

Because of the missing phone, Sun was questioned by company officials and -- according to posts on online forums by his friends -- detained, searched and beaten.

Apple China said it was awaiting the results of an investigation into Sun's death.

"We require that our suppliers treat all workers with dignity and respect," Apple said in a statement.

Foxconn also released a statement outlining several steps it has taken following the suicide, including counseling for its employees.

"I can honestly say Foxconn has not given anyone permission to do anything unlawful," executive Li Jing Ming said.

Employees connected to the incident were either fired or suspended without pay, the statement said.

"Regarding the loss of such a young life, the company and I express our deepest sorrow and regret and are apologetic to his family as we were not able to properly take care of him," Li said.

The company said it will support Sun's family with funeral arrangements and other matters.