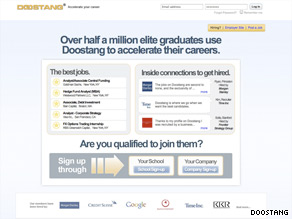 Doostang gets its name from the Latin for "reaching for talent."

Doostang is an online community that seeks to match the brightest new grads with what it says are the crème de la crème of positions in finance, consulting and tech.

Exclusivity is the cornerstone of this network, which connects graduates from elite schools with top employers.

The site offers its members access to selective jobs that are not really available on the open market, according to founder Mareza Larizadeh.

It's able to do that because recruiting managers are drawn by the caliber of its members, which includes students from the top business schools, he says.

Schools like The Wharton School of the University of Pennsylvania and Duke University's Fuqua School of Business have formed partnerships with Doostang that enable their students to access the network's premium job listings for free.

"Our goal is to get great jobs in front of relevant people and relevant candidates in front of hiring managers," Larizadeh tells CNN.

Larizadeh never intended to launch a career start-up. He was completing his MBA at Stanford University in 2005 when he got the idea for Doostang, which is a modified version of "reaching for talent" in Latin.

Classmates were exchanging emails about career advice, and "I thought, why don't we give this some structure?" he recalls.

Four years and a round of venture capital funding later, what started as a hobby designed to help friends share career information has turned into a network with approximately 600,000 members.

Larizadeh estimates that roughly a dozen of the top 20 MBA programs have signed partnership deals with Doostang.

A member applying for a job at McKinsey, for instance, is able to connect with members of his or her Doostang network that may have a McKinsey link to gain an insider's perspective.

Larizadeh believes it isn't just the quality of people and jobs that distinguishes Doostang from other careers sites like LinkedIn and executive search service The Ladders.

Doostang is also distinctive in that it caters specifically to students in their 20s and 30s with most of the positions advertised geared towards people at the beginning or middle of their careers.

Users initially had to be invited to join the network, but now Doostang is open to everyone. Members, however, have to pay for access to the most exclusive job postings.

This helps keep the membership selective, Larizadeh said. Generally, people won't pay for membership if they aren't qualified for the jobs being advertised, he explained.

The fee for premium services, which gives access to the more exclusive job postings, ranges from $25 to $40 a month.

The site, which has always featured jobs at hedge funds, private equity firms and investment banks prominently, experienced a surge when the financial crisis kicked off last fall.

"Even though the economy is not as bad as it used to be, we are still seeing a good uptake. Our traffic is still going strong," Larizadeh says.