10 tips for getting a pay raise in a recession

LONDON, England (CNN) -- The recession is a good excuse for employers to introduce a pay freeze, but what if you think your hard work deserves greater financial reward? Four experts share their tips for getting a pay raise during the downturn. 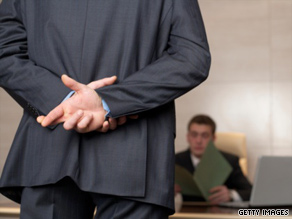 With a bit of luck, you could get a pay raise, even in the current economic climate.

1. Knowledge is power, so before you pursue a pay increase, do some research."Compare your salary with that of your colleagues and with job adverts so you know the market salary for your position," says Sherridan Hughes, occupational psychologist with Career Analysts.

2. "You need to justify a pay raise," says Corinne Mills, managing director of Personal Career Management. She says you need to show your boss that you are exceeding your job requirements.

"You need to demonstrate that you have brought in business or have taken on additional responsibility. Perhaps redundancies mean you have been doing the jobs of two people," says Mills.

3. Don't work harder for that pay increase, work smarter -- and work in line with the goals of management. So says Robert Weil, president of Institute for Coaching. "Increased pay and bonuses go first to those who impact the bottom line or impact what is most important to management," he says.

4. Weil says you must make sure your actions and daily plan are aligned with your company goals. "If the company, for example, wants more business from existing clients, then make sure you are putting all of your energy into that. If your company wants to cut costs, make sure you are doing that," he says. "Think outside the box, get creative and be resourceful".

5. It's not all bad news. David Randall, a career consultant with Career Energy, says that even in the depths of the downturn, some businesses are giving pay raises.

"Firms need talent and talent costs money -- if they don't pay then people will go elsewhere. That applies in large measure to executives, who are by definition talented," he says.

Do you have any tips for getting a pay raise? Sound Off below

6. Randall says that when you approach your boss for a raise you need to create a win-win deal for both of you. You should say that your goal is to have a higher salary and you want to know what to do to perform to a higher level that justifies that salary.

"It could be you can do that by working in a different way, by taking on more responsibility or by meeting certain targets that your manager can set," he says. "Whatever it is, a deal can usually be worked out that will create the extra value to justify a pay increase."

7. Ask nicely. Mills says it's important to discuss your request in a pre-arranged meeting. She says that even if your boss says no, they might be able to set a date for a pay review, perhaps in six months. If a date is set for a future review, confirm it in writing, even if it's just an email.

8. Remember, not all jobs are equal and not all are suffering from the downturn. Randall says, "Businesses need to keep up with the state of labor market supply. In shortage areas they will have to pay people in order to retain them."

9. It can seem extreme but sometimes threatening to leave is what it takes to make your boss realize your value to the company, says Hughes. But she adds, "If you threaten to leave your job if you don't get a pay raise, you must be prepared to follow through with your threat."

10. "Manage expectation," says Mills. "Times are tough and if it's not in your contract that you will get a salary raise each year, don't think you have an automatic right."