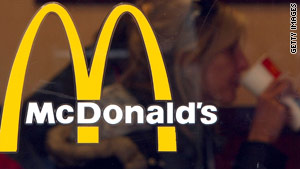 (CNN) -- Iceland is losing its only three McDonald's restaurants as a result of the poor economic situation in the country.

Businessman Magnus Ogmundsson, who owns the only McDonald's franchise in Iceland, said it had become too expensive to operate the restaurants after Iceland's currency, the krona, plunged in value.

"The krona is quite weak and we are buying everything in euros, and we have very high tariffs on imported agricultural products," he told CNN on Tuesday.

In January 2008, it cost more than 95 Icelandic krona to buy one euro, according to the Central Bank of Iceland. Tuesday, that price had shot up to more than 186 krona.

That means the currency is worth half as much today as it was in January 2008 -- and things priced in euros now cost twice as much to buy.

Ogmundsson said the McDonald's Corporation worked with him to find a solution, but in the end he had no choice but to close.

There was "good cooperation" with McDonald's, Ogmundsson told CNN. "No hard feelings."

McDonald's said it had become financially prohibitive to continue operating in Iceland because of "the unique operational complexity of doing business in Iceland combined with the very challenging economic climate in the country."

It said there are no plans to seek a new franchise partner in that country.

The three stores will close at midnight Saturday, but they will reopen as an independent chain called Metro, with more domestic ingredients and fewer imported products.

"We believe we can be more successful with our own brand," Ogmundsson said.

A McDonald's Big Mac hamburger currently sells for the equivalent of $5.29, making Iceland one of the most expensive places in the world to buy the sandwich. Only Norway and Switzerland charge more, according to the countries listed on the Economist magazine's Big Mac Index, published in February.