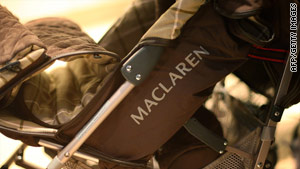 (CNN) -- Close to one million strollers have been recalled by their manufacturer following reports at least 12 babies or toddlers had their fingers amputated after they were caught in the hinges.

British company Maclaren said the recall concerns Chinese-made models on sale in the U.S. that open with an "umbrella" mechanism.

Maclaren said it was issuing a free repair kit make the hinges safe.

The CPSC said the warning concerned models dating back to 1999 sold at stores including Target and Babies R Us.

The mechanism "poses a fingertip amputation and laceration hazard to the child when the consumer is unfolding," the CPSC said in statement issued jointly with Maclaren.

The manufacturer said its strollers met required safety standards, but the recall was being applied voluntarily to "alert the operator when opening or closing the stroller of the possible risk of injury."

In a separate statement, Maclaren's European arm said that no recall was being issued in the European Union, where there had been fewer reported injuries, despite higher sales.

"We wish to reassure our customers that they should continue to use their existing Maclaren buggies since they are safe when opened and closed correctly," it said.

"Our advice is that consumers should take the same level of caution and care as when opening or closing a car door or any other moving part that can be found in many other baby and toddler products.

"There are a lower number of similar reported incidents amongst the considerably higher number of Maclaren buggies sold in Europe. If a buggy is folded or unfolded in line with our operating instructions the risk of injury is non-existent."