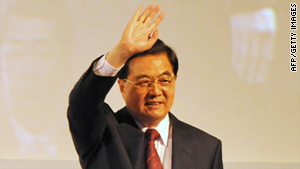 Hu called for the developing world should have a greater voice in international financial institutions.

SINGAPORE (CNN) -- China's President Hu Jintao has urged the global community to fight the forces of protectionism in the aftermath of the global financial crisis.

"The international financial crisis has given rise to trade and investment protectionism of various forms," he told the Asia Pacific Economic Cooperation CEO Summit on Friday. "Protectionism will not help any country move out of the crisis. It can only pose a threat to the fragile momentum of the economic economy."

His comments come ahead of U.S. President Barack Obama's arrival in Singapore on Saturday, as well as his first trip to China early next week.

In recent months, there have been increased rumblings of potential trade spats between the two nations, which are dubbed the de facto G-2, because of the impact of their economies on the world.

In September, the U.S. placed tariffs on Chinese-made automobile tires; China responded by cutting off imports of auto parts and poultry parts, including chicken feet, a delicacy in China.

In addressing the global economy, Hu also said the developing world should have a greater voice in international financial institutions. Though he did not mention them by name, the World Bank and the International Monetary Fund have come under criticism for under-representing developing economies.

"We are making great effort to expand the domestic market, especially the rural market, control total discharge of pollutants and ensure both a sound natural eco-system and a sound socioeconomic system," he said.

Hu's speech was one of the most widely anticipated during the weeklong events of APEC, given the importance placed on China and the rest of Asia in leading the global recovery -- signaling a historic shift in the world economy.

China's gross domestic product increased 8.9 percent in the third quarter, advancing toward the goal of 8 percent growth for the year.

The U.S. economy emerged from recession with 3.5 percent GDP growth in the third quarter, but that news was tempered by unemployment hitting 10.2 percent in October -- a 26-year high.

Though China is important, a PricewaterhouseCoopers survey of APEC business leaders said any sustained recovery of the global economy depends on recovery in the United States.

Nally said it would take the United States two years of consecutive quarterly growth, totaling 5 percent annual growth, before the economy could be considered recovered.

"It will be a longer recovery period than what we've seen in the past," he said.