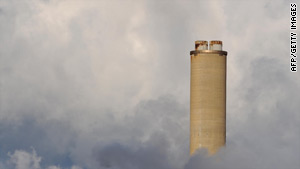 (CNN) -- Carbon trading -- with its mix of free-market principles and government regulation -- holds global appeal as a way for businesses to reduce emissions. But lack of a global market for carbon trade and questions over surveillance and accounting for pollution offsets raises questions about its viability.

The factors complicating accurate carbon-trading reportage begins with the "product" -- in this case the absence of an invisible gas. Adding to the intangibility is the crediting of businesses for projected reductions in greenhouse gas emissions.

"They are a tricky beast -- an environmental commodity is not a natural private good, like a tube of toothpaste or a haircut," said Michael Gillenwater, dean of the Greenhouse Gas Management Institute, in an interview earlier this year.

"You can just look in the mirror to tell if a haircut is a good product... in carbon trading, it's just a piece of paper, a record in a database and the trust that it really does represent a truthful accounting of emissions," he said.

Carbon trading uses a stick-and-carrot approach to reduce the gases that cause global warming. The stick: Governments cap total emissions and require pricey permits and hefty fines for emissions. The carrot: Industry finds ways to reduce emissions to decrease costs and with leftover polluting allocations sell to the highest bidder on the open market.

Video: What is carbon trading?

Carbon trading allows companies to pollute up to a point -- but, in theory, the total amount of pollution should be less than current levels. More than 30 countries worldwide have or are planning a carbon trading market.

For carbon trading to really work, however, the market needs to be worldwide, said Louis Redshaw of Barclays Capital.

"The U.S. is close, not close enough, but getting closer to implementing cap and trades. Japan is doing the same thing.," Redshaw said. "South Korea, even, are going to follow what Japan does."

The European Union is home to the biggest emissions trading system, but that has been subject to complaints that too many pollution permits have been issued.

"Carbon trading on its own can't save the planet," said Robert Rabinowitz of the European Climate Exchange. "Carbon trading can help make the process cheaper, but only if the politicians set sufficiently ambitious targets."

This is a worry since the carbon trading market as pollution joins the ranks of other tradable commodities such as coal and natural gas.

The global market for carbon trading was "vulnerable to Enron type accounting scandals" because of the lack of global standards on emissions accounting and qualified professionals to account for those changes, according to the "2009 Greenhouse Gas/Climate Change Workforce Needs Assessment Survey" released earlier this year.

"Any crediting involving projections are inherently uncertain and vulnerable to manipulation by the unscrupulous," said the report, a global survey of industry professionals and policy makers by Greenhouse Gas Management Institute and Sequence Staffing.

CNN's Jim Boulden and Kevin Voigt contributed to this report