(CNN) -- A New Year's Day shooting in which a subway police officer fired a deadly shot into the back of an unarmed man has the San Francisco Bay Area demanding answers as authorities appeal for patience. 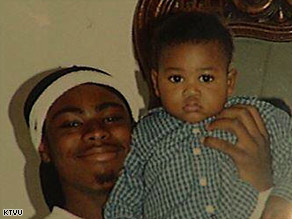 Oscar Grant, 22, was killed January 1 in a shooting at a subway station in California's Bay Area.

Attorney John Burris called the shooting "unconscionable" and said he filed a $25 million claim with BART on Tuesday, alleging wrongful death and violation of civil rights by use of excessive force. BART has 45 days to respond, Burris said.

"It's a clear shooting in the back that should not have taken place," Burris said, characterizing the incident as a case of "overagressiveness by police."

KTVU obtained at least two videos of the incident and its prelude. One video, which KTVU reported came from a train passenger who wished not to be identified, shows three young men against a wall in the crowded Fruitvale station.

Karina Vargas, who also provided a video to KTVU, said the men had been pulled from the train car in front of hers.

Burris said Tuesday that the young men had been celebrating the new year at a popular waterfront tourist spot, The Embarcadero. They were heading home when police pulled them from the train car.

Some of the young men were handcuffed, but not 22-year-old Oscar Grant. The video from the anonymous passenger shows Grant seated on the floor with his back against the wall.

Grant holds up his hands, appearing to plead with police. Burris said Tuesday that Grant was asking police not to use a Taser.

The interaction on the video is not audible.

One of the officers kneels on Grant as another officer stands up, tugs at his gun, unholsters it and fires a shot into Grant's back.

Burris said the bullet went through Grant's back and then ricocheted off the floor and through his lungs.

"I couldn't believe it. We was already following directions and everything, and they shot him," Fernando Anicete, one of the young men with Grant, told KTVU.

Burris has spoken to witnesses who claim that Grant was trying to resolve the situation.

"He had been telling people to calm down. 'Be cool. Just do what they tell you to do,' " the attorney said.

Johnson said the video provided to KTVU is inconclusive.

There are two surveillance cameras at the Fruitvale station, but a BART official told CNN that no video is being released at this time.

The community is outraged, according to local media. CNN affiliate KRON-TV in San Francisco reported that about 20 people rallied Monday outside BART's district headquarters in Oakland.

"A 22-year-old unarmed father was executed and assassinated, and BART expects us to swallow that the shooting may have been an accident," protest organizer Evan Shamar of Oakland shouted through a bullhorn, according to KRON.

BART says an investigation is ongoing and hasn't reached any conclusions.

"The BART police say that they are taking the investigation very seriously, but they had better find a way to reach out to the public effectively about what is going on and why. Otherwise, public outrage over this case is going to grow exponentially with every passing day," the newspaper said.

BART Police Chief Gary Gee released a statement this week expressing condolences for Grant's family and saying the authority is cooperating with the Alameda County district attorney's office, which is also investigating.

Gee added that BART will complete an "unbiased and thorough investigation" and asked the public to be patient.

"As frustrating as it is, I want to stress that we cannot and will not jeopardize this case by discussing details before the investigation is complete," Gee said.

Gee provided minor details of what preceded the shooting: BART police received a report that two groups of passengers were involved in an altercation as their train left the West Oakland Station about 2 a.m.

"BART police officers responded to the platform at Fruitvale and detained several persons," Gee said in his statement.

BART has not identified the officer, saying only that he has been on the force two years. He has undergone drug and alcohol testing and is on administrative leave, both of which are standard procedure, according to BART.

The officer has yet to make a public statement.

Johnson and Gee say they are refraining from releasing further details to avoid compromising the investigation. Johnson further told KTVU that BART wanted to avoid "polluting the potential pool of witnesses."

Burris, however, said there is no excuse for the use of force on a man being restrained by police. If BART does not grant his $25 million claim or if the authority fails to respond in 45 days, Burris intends to file a lawsuit, he said.

He is pushing the Alameda County District Attorney Tom Orloff to press second-degree murder or involuntary manslaughter charges, he said.

"No one wants to believe a cop would just kill somebody like that," he said. "My view is, this is criminal conduct, period."

Johnson told KTVU that authorities are trying to determine whether the officer who shot Grant accidentally drew his gun instead of his Taser.

He also said authorities still need to speak to all the officers but that the BART officers involved in the incident felt outnumbered and called the Oakland Police Department for backup. iReport.com: 'I'm not happy with the state of the police'

"We need to take our time and go through this thoroughly and try to figure everything out. There's more to this story than this one angle," Johnson told the station.

Asked whether there were developments Tuesday, Johnson said he had none.

Thomas Blalock, president of BART's board of directors, has urged the public not to jump to conclusions.

"Let's get the puzzle put together, and then we'll come to a conclusion," Blalock told KTVU.