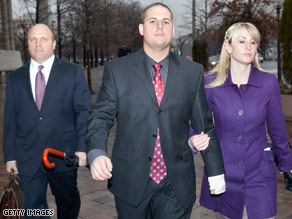 Each of the former guards has been charged with 14 counts of manslaughter, 20 counts of attempted manslaughter and one count of using a firearm in the commission of a violent crime.

The five defendants, seated in a row at a courtroom table, remained silent in court, and as they entered and departed the courthouse. A lawyer entered their plea on their behalf.

Attorney David Schertler, speaking for all the defendants outside the courthouse, predicted they will be proved innocent.

"We want to make it clear to everyone these men committed no crime. They were defending themselves on a battlefield in a war zone when this occurred," he said.

Judge Ricardo Urbina set a trial date for February 1, 2010. He agreed with defense attorneys that preparations for the complex case will require a full year, including the likely need for lawyers to travel to Baghdad to gather information and conduct interviews.

"The United States government had a year and a half to investigate the case, and we did not. So we need a year to catch up," Schertler told reporters.

Lead government prosecutor Kenneth Kohl did not comment outside court.

The Baghdad incident, which occurred September 16, 2007, exacerbated the feelings of many Iraqis that private American security contractors have operated since 2003 with little regard for Iraqi law or life. It also created an extremely delicate political situation for the Bush administration and the Iraqi government.

Prosecutors did not bring manslaughter charges for three of the 17 fatalities because they do not believe they have enough evidence to win a conviction in those deaths.

The company of Blackwater Worldwide does not face any charges.

The indictment of the five men represents the first prosecution of non-Defense Department contractors under the Military Extraterritorial Jurisdiction Act (MEJA), which was amended in 2004 to allow the Justice Department to prosecute such personnel providing services "in support of the mission of the Department of Defense overseas."

The attorneys for the defendants contend that Blackwater's employees in Iraq are exempt from the provisions of MEJA because the company has a contract in Iraq with the State Department, not the Defense Department.

Also muddying the case are assurances of immunity initially given to the guards by State Department diplomatic security agents, who were investigating the incident before the FBI tried to interview them once it took over.

The State Department maintains its agents did not offer blanket immunity from criminal prosecution, but promised only that the statements the guards made on the scene could not be used against them in any prosecution.

A recently approved U.S.-Iraq Status of Forces Agreement pointedly specifies that U.S. civilian contractors will no longer be immune from Iraqi prosecution for crimes committed in that country.

All About Blackwater Worldwide • Iraq • Baghdad