LOS ANGELES, California (CNN) -- Attorneys for exiled film director Roman Polanski are asking that a judge outside Los Angeles be assigned to decide a motion to dismiss a 30-year-old sex offense case against him, claiming prosecutorial and judicial misconduct. 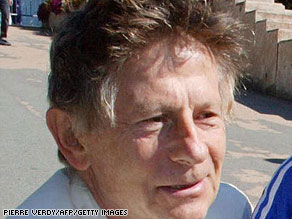 Oscar-winning director Roman Polanski has lived in exile in France since fleeing the United States in 1978.

Polanski's defense team argued in a motion filed Monday that the entire Los Angeles County Superior Court system should be disqualified from the case because of statements made by the court's chief spokesman in response to its filing last month.

Polanski, 75, has lived in exile in France since fleeing the United States in 1978 after pleading guilty to unlawful sexual intercourse. The Oscar-winning director admitted to having sex with a 13-year-old girl, and an arrest warrant against him remains in effect.

The motion for dismissal, filed in December, cited what the defense called "extraordinary new evidence" of "repeated, unlawful and unethical misconduct" by the Los Angeles district attorney's office and the judge in Polanski's case. The allegations are based on details that surfaced in a 2008 documentary for HBO.

The December motion also argued that Polanski should not be required to return to the United States to appear in court for the issue to be considered. The Los Angeles Times quoted court spokesman Alan Parachini the next day saying that "it's been the court's position consistently for several years that in order to pursue dismissal, or sentencing, Mr. Polanski must personally appear."

That statement and others, Polanski's attorneys contend, show the court has prejudged a central issue in their motion.

"In its filing, the DA does not dispute the serious misconduct of the court and the prosecutors, which is at the heart of our request to dismiss the case. Instead, the DA's filing seeks to avoid scrutiny of all the misdeeds by focusing on the single issue of whether or not Mr. Polanski needs to be present for a Court hearing," Chad Hummel, a Polanski lawyer, said in statement Tuesday.

"The Court, through its spokesperson, already improperly ruled on that issue weeks ago, which is why the case should be moved out of Los Angeles County. This case deserves to be reviewed by an impartial judge, who does not have a vested interest in the outcome."

According to the initial motion for dismissal, the HBO film "Roman Polanski: Wanted and Desired," reveals that a deputy district attorney at the time, David Wells, engaged in "unethical and unlawful" conversations with the late Judge Lawrence Rittenband.

Rittenband was "illegally influenced" by Wells and ignored the terms of Polanski's plea agreement, which required considering counsel argument before deciding on a sentence, the document says. Instead, Rittenband sentenced Polanski to prison, even though the chief prosecutor, a probation officer and the girl's family had recommended the contrary.

Polanski failed to show up for sentencing and never returned to the United States.

"I'm not surprised that he left under those circumstances," says prosecutor Roger Gunson in his interview for the documentary, which is noted in the court document.

The director, a native of Poland who resides in France, has continued to direct films in exile. He won the Academy Award for best director for the 2002 Holocaust drama "The Pianist."

His pregnant wife, actress Sharon Tate, was murdered by followers of Charles Manson in 1969.

All About Roman Polanski • Sharon Tate