MIAMI, Florida (CNN) -- The wife of kidnapped security expert Felix Batista broke her month-long silence on Wednesday and pleaded with his Mexican abductors to "please have mercy." 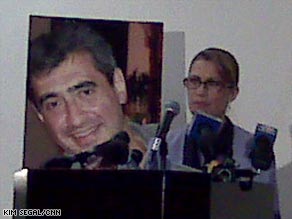 "Please let him go. Let him return to his family," wife Lourdes Batista said at a news conference in Miami, Florida.

"He has never done anyone any harm," she pleaded. "On the contrary, he has always extended a hand to those in need. I beg you with all the strength in my heart."

Batista, 55, disappeared December 10 from a restaurant in Mexico, a case that made international headlines because of its irony. The anti-kidnapping expert had been kidnapped, authorities said.

The Batistas have been married 31 years, his family said. They have five children. Two of them attended the news conference but did not speak.

Watch Lourdes Batista plead for the release of her husband »

Batista's family has not heard from him or his kidnappers. There have been no demands for ransom, no contact at all.

"Words do not describe the pain that we are going through by not knowing where he is or what has happened to him," said his sister, Jackie Batista. He descibed the family's distress as a "pain you do not bestow upon anyone not even our worst enemies."

"I ask that you at least let us know what has happened to our beloved Felix," she implored.

Watch more from the news conference »

"He's always been a professional at what he does," his sister said.

He arrived December 6 in Saltillo, Mexico, about 250 miles south of the U.S. border, to take part in a security seminar about kidnappings.

The FBI has been working with Mexican law enforcement to determine what happened and to bring Batista home safely.

The U.S. embassy in Mexico has not returned CNN's calls, nor has Mexico's Ministry of the Interior.

The Batista family, however, is talking.

"We just want to get some news and would like to make a public plea, and in return, we hope to get some answers," Jackie Batista told CNN on Tuesday.

Felix Batista was in a restaurant with several other people when he received a phone call, according to a written statement released by the state attorney general's office in Saltillo.

After speaking on the telephone, he told his colleagues that several people in a white pickup were going to give him a message, said the statement. He got into a vehicle which did not match the description he had given his colleagues. Since then, no one has had any communication with him.

The statement said there was no sign of violence at the scene.

"I don't understand how a man who has always loved Mexico and its people so much, so dearly, can be made to suffer is this manner," Batista's wife said at the news conference. "My heart is broken. My children need their father. Please, I implore those of you that have feelings please let him go."

"The fact that he was purposely picked up and they haven't reached out to family is certainly worrisome," said Gary Noesner, former chief of the FBI crisis negotiation unit, who now works as a security and kidnapping consultant.

"Typically, you would get contact sooner, but sometimes kidnappers wait a period of time. They use that as a pressure tactic," Noesner added. "I would have thought they would have had contact by now."

He added, "The family wants to be contacted. There is a bit of a good news story if they are contacted, because that opens up a dialogue, and that is a recipe for a resolution."

Mexico has seen an alarming rise in kidnappings and violence. Organized crime and drug related killings more than doubled from 2007 to 2008.

President Felipe Calderon met over the summer with the country's 32 governors to unveil a plan to combat the increase in kidnappings. The plan includes building special prisons for kidnappers, and a constitutional amendment to reinstate the death penalty for kidnappers who kill their captives has been sent to Mexico's legislature.

Experts believe that people in Mexico who have relatives in the United States are specifically being targeted because it's assumed they have money.

"What kidnappers basically do is look at who has money that we can get," Noesner said. "They will go after anyone who they perceive will provide a payoff."

Batista worked as a retained consultant for ASI Global LLC, a global kidnap and ransom response company, for 18 months.

"He is an extremely gifted and talented consultant and has worked in the region for many, many years," company President Charlie LeBlanc said.

Since Batista's kidnapping, the company has had representatives with the Batista family to help them through the crisis, he said.

"The fact that we have not had contact is not necessarily a bad sign. We've had cases in the past that have gone much longer without contact," he said.

But almost a month has passed since Batista's disappearance, and that is not a good sign, the experts cautioned.

"It becomes more problematic when there's not contact from the bad guys. You're very limited as to what you can do," Noesner said.

"Its far too early to say, 'This is typical,' but I'd be concerned," he added.

Perhaps the Batista family can find some solace in the words of Felix Batista himself. In an interview with TV Azteca, a CNN affiliate based in Mexico City, he offered some advice to the families and loved ones of a kidnapping victims.

"Stay calm and ask [the kidnappers] for time. Time to do two things: to look for the missing person if possible and confirm that it is in fact a kidnapping."

All About Kidnapping • Mexico • Federal Bureau of Investigation