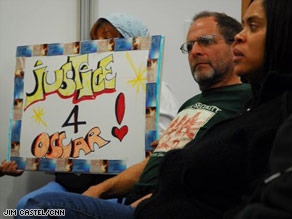 A woman holds a sign demanding justice for victim Oscar Grant at a BART board of directors meeting Thursday.

The BART board of directors meeting started with a moment of silence for Oscar Grant, a 22-year-old father who was killed on New Year's Day in a crowded train station, but it quickly turned into a parade of angry speeches by elected officials, activists and outraged citizens.

For nearly six hours, according to local media, about 60 people addressed the board.

The public asked the BART directors, and they agreed, to set up a committee to review procedures. They also discussed the possibility of creating a civilian review board.

Inside the room, people clutched Grant's photo. Some held signs against police brutality. A couple of times citizens chanted loudly and pumped their fists in the air.

Grant's mother, Wanda Johnson, dressed in a shirt with her son's face and the words "RIP Oscar," held a news conference Thursday afternoon at the family attorney's office to plead with the public to stop the rioting breaking out in response to the shooting, according to CNN affiliate KTVU-TV. iReport.com: Are you there? Share your photos, video and reaction

"You're hurting people who have nothing to do with the situation. You're vandalizing their property, hurting their cars and breaking their windows. Please just stop it, please."

Johnson wiped tears from her eyes as her son's friends also pleaded for calm.

At the news conference, the Grant family attorney, John Burris, said he understood the frustration that African-Americans, especially those who are young, were feeling. Noting the case of Sean Bell, Burris asked the community to not take away from the tragedy by creating more violence.

"That's not what Oscar stood for, that's not the life he led, so don't mar the image of Oscar. He was trying to be a peacemaker on that tape," Burris said referring to a recorded video of Grant's shooting.

The Oakland Police Department made 105 arrests, including a mass arrest of about 80 people at 11 p.m., said Officer Jeff Thomason. The charges include inciting a riot, vandalism, assault on a police officer and unlawful assembly, he said.

One officer was injured, but not seriously, Thomason said.

Some protesters lay on their stomachs, saying they were showing solidarity with Grant, who was shot in the back as he was face-down on the floor at a train station.

Several witnesses caught the incident on camera, and there have been numerous demonstrations this week. The protests turned violent Wednesday night after Grant's funeral and following an announcement by authorities that Officer Johannes Mehserle, who is implicated in the shooting, had turned in his resignation.

Videos from witnesses show Mehserle shoot Grant in the back as another BART officer kneels on Grant. A BART spokesman has said there is more to the story than what can be seen on the grainy images.

Oakland police tried to keep protesters at bay Wednesday night as they smashed car windshields and storefront windows. KTVU footage shows one protester jumping up and down on a police car hood, while another demonstrator pushes a flaming Dumpster up against it.

"We live a life of fear, and we want them to be afraid tonight," an unnamed female protester said. iReport.com: BART protests turn violent

The protests began peacefully about 3:30 p.m. with about 500 people gathering at the Fruitvale station, where the shooting occurred last week, Thomason said.

Soon, a group of about 150 protesters surrounded a police officer. Fearing for his safety, Thomason said, "the decision was made to use chemical agents to protect that police officer."

The crowd calmed down, but then a contingent of protesters turned violent again, smashing windows and setting cars on fire, he said. Police tried to disperse the crowd and warned five times that anyone who didn't leave would be arrested.

At about 8:30 p.m., police started making arrests. One person was arrested after carrying a firearm; another faces charges of possessing suspected crack cocaine, Thomason said.

The crowd finally dispersed about 11 p.m. after police hemmed in a crowd of rowdy protesters at the downtown intersection of 20th Street and Broadway. There, police cuffed 80 protesters, Thomason said.

"If people want to peacefully protest, we're all for that," he said. "If it's peaceful, we're all for it. We're not going to stand in the way of people saying what they want to say."

This was not the case Wednesday night, Thomason said, warning that police would be out in force again Thursday night to make sure any protests remain orderly.

David Chai, chief of staff for Oakland Mayor Ron Dellums, said Dellums was "out and about" in the streets Wednesday, urging protesters to exercise their frustration productively. Dellums also announced that the Oakland Police Department was conducting its own investigation into the matter.

"The mayor's involvement was essentially to try to calm everybody down," Chai said. "He obviously expressed some frustration with the process."

He said Oakland residents also were "rightfully" frustrated that the investigation has gone on for a week with little development.

Thomason said Oakland police will either work alongside BART in its investigation or take the probe over, but no decisions have been made.

BART spokesman Linton Johnson said Wednesday that Mehserle's attorney has advised his client not to speak to authorities. BART released a statement Wednesday saying the officer's attorney and a union representative had handed in his resignation letter.

"Officer Mehserle's resignation should allow BART to get back to the business of managing regional transportation and allow the Alameda County district attorney to take primary responsibility for reviewing this matter," the statement said.

District Attorney Tom Orloff told CNN on Wednesday the incident is a "pretty clear" homicide, and his office will focus primarily on Mehserle's mental state before the shooting.

"Without so much as flinching, the Officer Mehserle stood over Grant and mercilessly fired his weapon, mortally wounding Mr. Grant with a single gunshot wound to the back," the claim alleges.

BART has until late February to respond.

Burris said that the young men had been celebrating the new year at a popular waterfront tourist spot, The Embarcadero. They were heading home when police pulled them from the train car about 2 a.m.

Witness videos show Grant and two other men sitting against a wall in the Fruitvale station after being pulled off the train. BART reported that they had received a report of an altercation on the train.

Police are seen putting Grant face-down on the ground. Grant appears to struggle. One of the officers kneels on Grant as another officer stands, tugs at his gun, unholsters it and fires a shot into Grant's back.

There have been unconfirmed reports that Mehserle may have mistook his gun for a Taser, but Burris is not swayed.

"My view is, this is criminal conduct, period," he said.

A statement Wednesday said BART "will continue to seek and examine all available evidence and will continue its full cooperation with the ongoing independent investigation by the district attorney."