(CNN) -- The former transit police officer accused of shooting an unarmed man at a California train station went to Nevada with his family "to clear his mind" after receiving death threats, his lawyer said Wednesday. 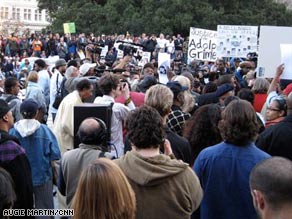 Hundreds of people took to the streets of Oakland, California Wednesday night to protest the shooting.

The lawyer's comments came after Johannes Mehserle was arrested on a fugitive warrant in Nevada.

Leads led investigators to Johannes Mehserle, 27, in Zephyr Cove, Nevada, on Tuesday, authorities said. He was contacted through his attorney and then surrendered.

"He was always prepared to surrender himself in the case," Christopher Miller, attorney for Johannes Mehserle said.

Mehserle waived extradition, and police officers were transporting him back to California on Wednesday.

Miller said his client may face arraignment as early as Thursday morning.

The lawyer spoke of Mehserle, 27, as "a fine officer with an excellent work history" adding "this case is not just about a video." Miller was referring to a cell phone video that captured the shooting.

"As this case moves forward through the justice system and all the circumstances of that chaotic night become clear, I fully expect Mr. Mehserle to be cleared of the charges against him," Miller said.

Miller's statements were a stark contrast to comments made by district attorney Tom Orloff earlier Wednesday at a news conference announcing they were charging Mehserle with murder.

"What I feel the evidence indicates is an unlawful killing done by an intentional act," Orloff said.

"From the evidence we have, there's nothing that would mitigate that to something lower than a murder," he added. "The murder charge was the appropriate charge given the state of the evidence."

Hundreds of people in Oakland, California, continued to express their outrage about the shooting by taking to the streets in a protest at City Hall Wednesday night.

It was the first major demonstration after more than 100 people were arrested during violent protests in Oakland that followed the victim's funeral last Thursday. The protesters gathered on the front lawn of city hall, where police blocked the front entrance, at about 4 p.m. (7 p.m. ET) before marching down to City Hall.

While many in Oakland, California have been vocal about the shooting, Mehserle himself has remained mum.

"In terms of an interview at this point in time, our hands are tied," he said.

He is accused of the shooting of Oscar Grant III at an Oakland, California, station on New Year's Day. The incident was captured on video by several witnesses and spurred violent protests in the northern California city.

Jail staff report that Mehserle has cooperated and is in a segregated area and on a precautionary health and welfare watch.

Mehserle resigned from his job as a BART police officer days after the shooting.

Grant, a 22-year-old father, was killed on New Year's Day in a crowded BART train station. Police had been called to the Fruitvale station after passengers complained about fights on a train and took Grant and several other people off the train once they arrived.

Videos from witnesses show Mehserle shooting Grant in the back as another BART officer kneeled on the man. The shooting spawned public outrage and a string of protests that led to more than a hundred riot-related arrests.

Police have not said whether Grant had been involved in the fight.

The Oakland Police Department is running its own investigation into the killing, at the request of Mayor Ron Dellums, Officer Jeff Thomason said Wednesday.