OAKLAND, California (CNN) -- A former police officer for the Bay Area transit system pleaded not guilty Thursday in the New Year's Day shooting of a passenger at an Oakland rail station. 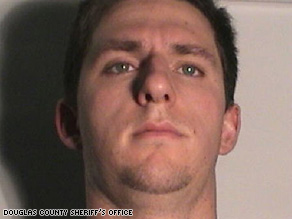 Former transit officer Johannes Mehserle is charged with homicide in the death of Oscar Grant III.

Johannes Mehserle, 27, appeared in a packed Alameda County courtroom, with his supporters separated by a courtroom aisle from relatives of shooting victim Oscar Grant III and other spectators. Mehserle is charged with shooting Grant, 22, in an incident that spurred violent protests in Oakland after being captured on video.

Mehserle resigned his job as a Bay Area Rapid Transit police officer days after the shooting, and he was arrested in Nevada earlier this week. Thursday's proceedings took less than five minutes, with Mehserle appearing behind heavy windows in an enclosure out of view of all but a handful of spectators.

Superior Court Judge Robert McGuinness ordered the ex-officer held until his next hearing, scheduled for January 26.

BART police had been called to Oakland's Fruitvale station January 1 after passengers complained about fights on a train.

Officers pulled several men, including Grant, off the train when it arrived at Fruitvale, and video taken by witnesses showed Mehserle shooting Grant in the back as another officer kneeled on the man.

Investigators have not said whether Grant was involved in the fight.

The shooting spawned public outrage and a string of protests that led to more than 100 riot-related arrests.

Watch some of the recent rioting in Oakland, California »

Thursday's proceedings drew an overflow crowd to the courthouse, with some would-be spectators grumbling that they could not get into the hearing.

Vicki Behringer contributed to this report for CNN.