Killer executed on 15th anniversary of his crime

(CNN) -- A former drug dealer was executed in Texas on Wednesday night for the murders of two reputed gang members -- 15 years to the day after the crime. 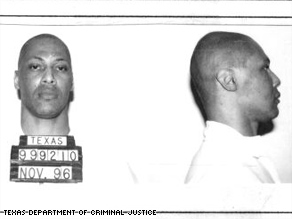 Texas death row inmate Frank Moore says he acted in self-defense when he shot and killed two in 1994.

Frank Moore, 49, was pronounced dead at 7:21 p.m. ET, a spokeswoman for the Texas Department of Criminal Justice said.

"Self-defense is not capital murder," Moore said before the lethal injection began, echoing his unsuccessful claims to the courts to prevent his execution.

Moore did not deny firing the fatal shots outside a San Antonio bar but insisted he acted in self-defense and did not deserve to die.

Moore was the second death row inmate to be executed in 2009. He spoke at length with CourtTVnews.com in 2007.

Samuel Boyd and Patrick Clark were shot multiple times in the head and chest early in the morning of January 21, 1994, outside the Wheels of Joy bar.

"They came with intentions to kill me," Moore said in the interview. "It was a do-or-die situation."

But no witnesses ever came forward at trial to corroborate Moore's self-defense claims. Prosecutors contended that Moore, a long-time gang member with a lengthy rap sheet dating back to his teens, shot the two in cold blood to assert his authority after a shoving match broke out in the bar, according to court records.

A Bexar County jury convicted Moore and sentenced him to death, but his conviction was reversed in 1998 after the Texas Court of Criminal Appeals found error in the trial court's refusal to give the jury the option of convicting Moore of a lesser offense. Even so, Moore was convicted and sentenced to death at his second trial in 1999.

Moore insisted he acted in self-defense when he opened fire on Boyd, 23, and Clark, 15, at a bar near the housing projects where Moore admitted he sold crack cocaine and weapons.

But it was not until 2006 that a private investigator, who once worked against Moore and his fellow gangsters, came forward with information that Moore said corroborated his self-defense claims.

Warren Huel, a retired Navy Seal who was in charge of the private security firm that oversaw the projects, was the first peace officer on the scene, arriving about 45 minutes before the San Antonio Police Department, according to an affidavit.

During that time, Huel said he spoke with witnesses who reported that Boyd and Clark shot at Moore first from inside the car after trying to run him over, according to the affidavit.

Witnesses also told Huel that they had seen the victims' relatives remove their weapons from the car before police arrived, Huel stated in the affidavit.

When Huel attempted to share the information with San Antonio Police, he says the officers told him to forget everything he had seen and learned, he said in an affidavit.

"I was told that did not matter, as they already had Frank Moore, the murder weapon and an eyewitness," Huel stated in his affidavit. "I was told Moore was a dope dealer and had to go to jail."

Since then, three others have come forward claiming they witnessed the shootings, providing similar details, said Moore's lawyer, David Sergi.

"Unfortunately, people from the street didn't come forward to testify at the time of the trial," he said. "The problem is, the law doesn't allow for a change of circumstances."

The Texas State Attorney's Office argued that Moore's claims should be dismissed because the evidence had always been available, and was not the "newly discovered" evidence the law requires.

A lower court sided with the state, prompting Moore to appeal to the 5th Circuit Court of Appeals. On Monday, the court declined to hear his claims, making the U.S. Supreme Court Moore's last chance for a reprieve. The justices remained silent on the matter.