(CNN) -- Two months before dying, a Virginia woman confessed to killing two women nearly 42 years ago, authorities said Friday, telling police she shot the women because they had taunted her for being a lesbian. 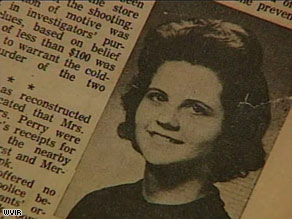 Constance Smootz Hevener, 19, was shot to death at an ice cream shop where she worked in 1967.

Sharron Diane Crawford Smith, 60, confessed in a November 28 interview to shooting the women at a Staunton ice cream store in 1967, authorities said.

"I was just pushed so far," Smith said, according to a transcript of a police interview.

Smith was arrested and charged with first-degree murder in the deaths of Constance Smootz Hevener, 19, and Hevener's 20-year-old sister-in-law, Carolyn Hevener Perry, according to CNN affiliate WVIR.

But health problems forced a postponement of a December court date, WVIR said, and Smith, who had heart and kidney problems, died January 19.

Authorities on Friday said they consider Smith the guilty party and are working toward closing the case.

In a transcript of the police interview, Smith told police she and the women worked at High's Ice Cream. The night of the shooting, she went to the store to tell the women she could not work the next day and took her .25-caliber pistol with her.

"I was just going to tell them that I couldn't work and one thing led to another."

She acknowledged that teasing "about my lifestyle" had gone on for a while.

Asked how the victims knew about it, she said, "How do kids find out about anything? I mean, it was really unusual back then."

She also said her stepfather had sexually abused her, but refused to elaborate on whether that played a role in the shootings or helped push her "over the edge."

"I don't know. I'm not trying to psychoanalyze it," she said.

In other interviews with police, Smith said that she got into a physical altercation with Hevener at the store, which was consistent with evidence at the crime scene, Commonwealth Attorney Raymond Robertson said. Bruises on Hevener's body were inconsistent with injuries that would have resulted from a fall after being shot, he told reporters.

"She expressed shame in herself. I never saw any tears. She expressed her concern for the family members [of the victims], as to bringing closure to this case," police investigator Mike King said.

"There will likely be questions surrounding this case we will never be able to answer," he said.

One of those questions was the whereabouts of the murder weapon, but a late development Friday may have solved that mystery.

In the November interview, Smith told police she gave the weapon to a detective on the police force in 1967, David Bocock, and that he buried it.

"He just said that it was sort of dangerous to have a gun, you could hurt somebody," Smith said, according to the transcript. "He said, 'I'll fix it for you if you want.' I figured it was the best thing to do."

It was unclear whether Bocock, who died in 2006, knew of Smith's involvement in the murders. The two knew each other, as Bocock taught Smith to shoot, but authorities said they were still investigating the relationship and whether Bocock was trying to cover for Smith.

Later Friday, the Staunton News-Leader newspaper reported its circulation manager had turned over to police a .25-caliber automatic handgun.

Kathy Myers told the newspaper that Bocock gave the gun to her now-deceased husband, a former Staunton police officer, in 1981, telling him, "Don't let anybody know I gave this to you."

Myers said she forgot she had the gun until she saw the police news conference Friday, and turned it over to authorities.